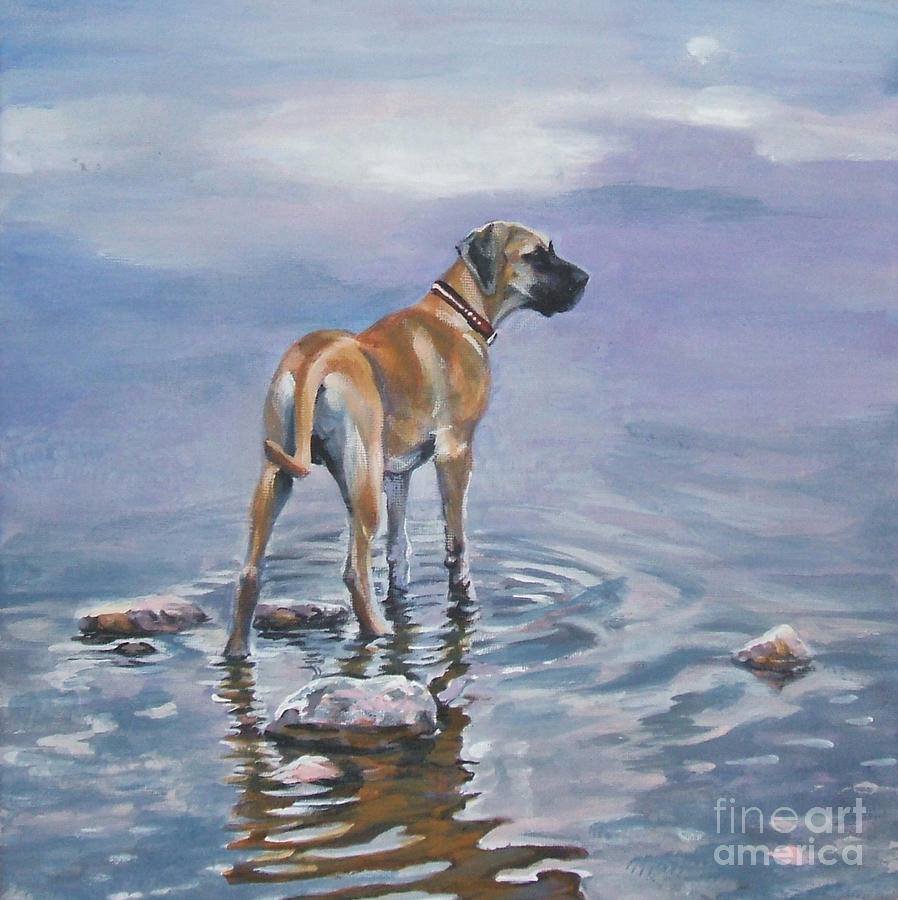 ▪The sound of running water makes you jump up and yell, “outside!”
▪You tell your dog to sit, and he backs up until he finds a chair
▪It takes 3 people to get your dog on the scale at the vets  ;                                                                                                                               ▪You walk your dog and everyone knows him by name, but you have no idea who these people are  ;
▪You can carry on a conversation with a dog’s muzzle firmly in your crotch;
▪You own a dog capable of pulling someone from a porta potty  ;
▪Your dog can hide an entire tennis ball (among other things) fully inside his lips and give you that innocent look that says, “What? I’m not eating anything!”
▪ You carry a tape measure with you when shopping for a new vehicle  ;
▪ You keep at least one color-coded “drool towel” in every room of your house  ;
▪ After banishing your husband, the snoring in your bedroom still keeps you awake  ;
▪ You are hiking with a friend who later suggests that you ought to have an environmental impact statement done on your dog  ;
▪ Visitors enter the house holding their privates protectively  ;
▪ You toss your dog a ball and cringe when he almost hits his head on the top of the doorway  ;
▪ You take your dog for a ride and he rests his head on your arm, causing you to make random right turns  ;
▪ You have given up on water dishes and you just use the bathtub  ;
▪ Your two dogs decide to play in the house, and they end up pulling the ceiling fan down — for the second time;
▪ You have to move over when brushing your teeth because your dog wants a drink  ;
▪ You show a picture of your dogs and kids together, and the first person you point out is your dog  ;
▪ While stopped at a stop light, everyone stares as your car rocks back and forth because the dog is panting out the window  ;
▪ You go to vacuum your car and most of the fur is up there on the ceiling  ;
▪ You avoid the dogs on your way out the door, so they won’t smear your makeup  ;
▪ You’ve learned to force a smile when asked “do you have a saddle for that thing?”
▪ The monthly dog budget exceeds your home mortgage payment  ;
▪ Your veterinarian has been able to put in a swimming pool, build a large home, buy jet skis and a personal plane  ;
▪ You have had to train your dog not to lick dishes, and the dishes are in the sink  ;
▪ The donuts you put on top of the refrigerator are gone when you get home and your dog has powdered sugar on his nose  ;
▪ Your dog can see what you’re cooking, and he tries to assist you in the preparation  ;
▪ You’re holding him straddled between your legs when the doorbell rings, you take a short (but fast!) ride straight to the door  ;
▪ The pizza delivery people tell you to meet them at the end of the sidewalk;
▪ Your dog stands in your lap and reaches over you to stick his head in the drive-through window at MacDonald’s and nearly        gives the cashier a heart attack when she turns around to give you your change  ;
▪ You purchase a large screen TV and you still can’t see the program when he stands in front of the television;
▪ After surgery, your bored pup decides to get up and cruise around the vet’s office– pulling the rolling IV stand behind him;
▪A five-year-old girl approaches to ask, “Why are you walking that baby cow?”
▪A car drives by, stops, and backs up to you. The driver rolls down his window to ask, “Excuse me, that’s a dog, isn’t it?” When you say yes, he turns to his wife and says, “See, I told you so, nobody walks a deer!” and drives away;
▪A six-year-old boy takes one look at your dog and says, “Wow! I bet he could eat a whole roll of toilet paper in one gulp!”
▪The big people walking the little dog always say “I don’t know how she does it.”
▪You see a Chihuahua and you mutter under your breath, “My dog craps bigger than that!”

Reprinted from Ginnie Saunders “Dane Owner’s Checklist.” Be sure to visit her site for other wonderful Great Dane related art,  information & merchandise