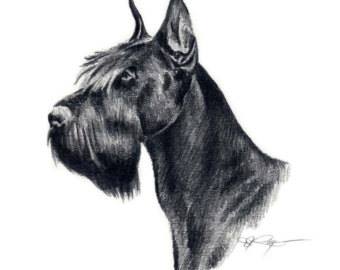 For years the Giant Schnauzer was called the Munchener, but the breed has also been called the Russian Bear Schnauzer, Munich Schnauzer and Riesenschnauzer.

The Giant Schnauzer was developed in Bavaria and Wurtemmburg as as a cattle and driving dog, but the breed was also used as guard dogs by butchers and in breweries. Giants are highly intelligent and are amenable to many kinds of training, so for that reason, they are valued as police or army service dogs, but also as devoted companions and guardians of home and family.