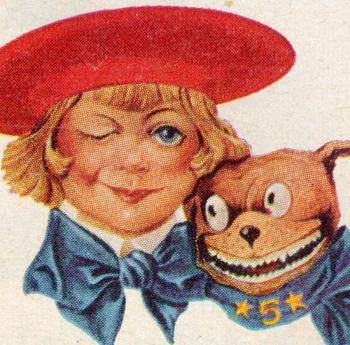 Buster Browns (shoes) are still sold, but it’s been a while since Buster and his dog, “Tige,” an American Pit Bull Terrier, have been seen as the company logo. There was a time in the early 20th century when the pair were well-known to the American public, as was Buster’s catchphrase: “I’m Buster Brown, I live in a shoe. That’s my dog, Tige, he lives there too!”

Buster had his roots in a comic strip character (The Yellow Kid and Buster Brown) created by Richard F. Outcault. The rights to the Buster Brown character were bought by the Brown Shoe Company in 1904 which made Buster and Tige (short for Tiger) the emblem for its children’s line. The Buster logo was printed on all its shoe boxes, and the company hired 20 little people to dress as Buster Brown and appear in department stores, theaters, and shoe stores across the country.

A profile and more history of Buster Brown and the Brown Shoe company can be found here.