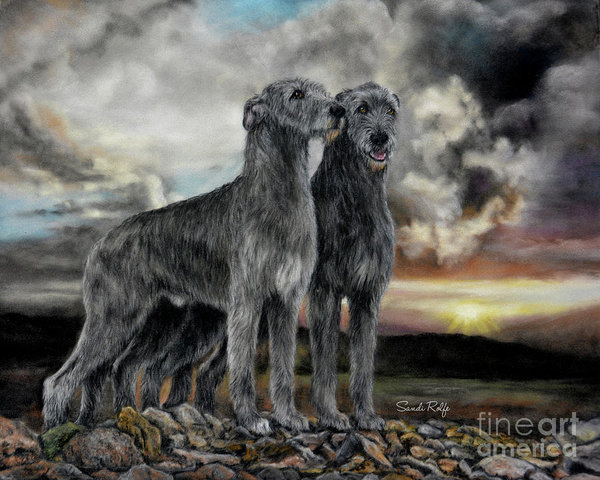 It’s likely that Ireland had one of the oldest records of formal dog breeding in the world, and they took the form of Brehon Law. Operational in Gaelic areas until the English conquest of Ireland in the early 17th century, Brehon Laws were a body of rules and regulations that were developed from customs that had been passed along from one generation to the next through oral recitation.  They are considered by many to be the oldest, most complicated, most egalitarian and extensive of legal systems in Medieval Europe – and while the phrase, “wandering lawyers” sounds amusing to us today, the laws were administered by Brehons (or brithem), who were wandering lawyers. Chronologically speaking, they came after Celtic druids, and while similar to judges, their real role was to preserve and interpret law. It was from them that that the laws got their name.

Brehon rules detailed life at a time when the Irish lived in huts made of mud, and bills were paid with cows (approximately the 5th century). They spelled out expectations for the care of madra (the Irish word for dog), as well as rules applying to standardized breeding and welfare. It was Brehon Law, for example, that stipulated that only nobility could own Irish Wolfhounds, or how many dogs one could own as determined by status. There were penalties for injuring a domestic animal like a dog, as well as for stealing one, and there were regulations that applied to fights by men (as well as by dogs). The laws required that notice of bitch in heat be sent to the four nearest neighborhoods, and if a dog committed a “nuisance” on a neighbor’s land, the dog’s “ordure must be removed as far as its juice is found.” Translation: People were required to poop scoop after their dogs.

By the time of Elizabeth I, Brehon laws were regarded as antiquated and unreasonable. They were banned in favor of English common law, but some of the Brehons had the presence of mind to hide the manuscripts, and to our good fortune, some survived and were translated in 1852 by two Irish scholars, Eugene O’Curry and John O’Donovan.  It was through their work that we know today that much of Brehon Laws (and Irish literature in general) show a tenderness for animals.

This next St. Patricks Day when you tip your glass to the green, tip it again to honor the people who thought dogs were significant enough to include in their laws. Madraí beo fada!