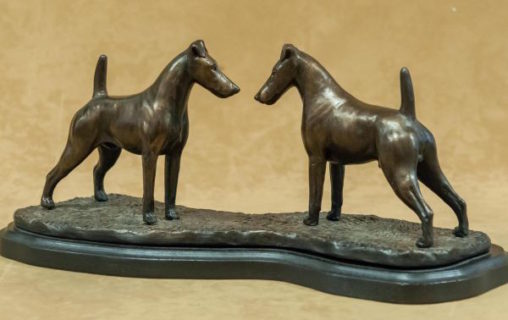 For those just tuning in, the best definition we’ve heard to explain sparring is “to gesture without landing a blow.” Sparring can occur in some terrier rings at a dog show at the request of the judge. He or she will select a few certain dogs to be brought to the center of the ring and “face off.”  Contact is never made – ever. This is not to stir up an attack, but to encourage a terrier to show “terrier attitude” by seeing which dog, figuratively speaking, will draw a line in the sand and “double dare” the other dog to cross it.  Done correctly, it shows which dogs are confident and full of themselves: Tails become stiff, necks become arched, ears stand up with alertness, and the dog will seem to stand on its tippy-toes and puff up its chest. It’s a sight to behold.

Not every terrier breed is sparred because it isn’t part of their breed nature, though there is one non-terrier breed that can be asked to spar. Can you guess it before clicking the link?

Teddy Roosevelt Terriers, Border Terriers, American Hairless Terriers, Dandie Dinmont Terriers, Bedlington Terriers,  Rat Terriers, Cesky Terriers, Staffordshire, Amstaffs, Norwich and Norfolk Terriers, Bull Terriers, Australian Terriers, Parson Russell Terriers, and Manchester Terriers should not be sparred during conformation judging.  Some folks are under the impression that the Soft Coated Wheaten Terrier isn’t sparred because the breed standard says that the Wheaten “exhibits less aggressiveness than is sometimes encouraged in other terriers.” In fact, Cindy Vogels has written that when sparring terriers, “Wheatens should be allowed their turn.” In her article, The Essence of Type, she adds, “The question isn’t whether or not to spar Wheatens, but rather how they should react when asked to spar. Each terrier breed will respond uniquely to sparring, and Wheatens should be expected to stand their ground without “flying.”

If we’ve omitted any terrier breeds that should not be sparred, please let us know and we’ll make the correction.