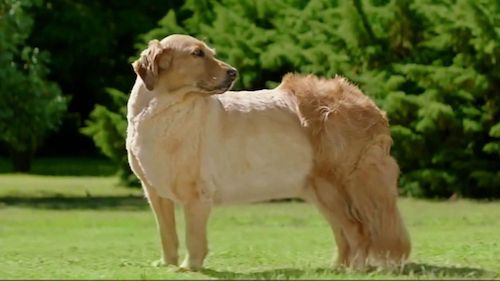 In the dog show world, where there is coat, there is temptation to trim, but it’s a sore topic for a lot of people in breeds with standards that address it by calling for either no trimming to be done at all, or by discouraging excessive or over trimming.

The problem is in the interpretation of the wording. “Excessive” for one person may not be excessive at all for another.  The Bouvier Standard, for example, says that the coat “may be trimmed slightly,” but what is “slightly?” The Shih Tzu standard warns against “excessive trimming,” but what is excessive?

We’ve seen brilliance in the hands of a groomer with a good eye, and it’s surprising how “natural” one can make a dog look when the standard calls for the breed to be shown in a natural state, or allows a dog to be trimmed for neatness. Meanwhile, a multitude of faults can be remedied with a good pair of scissors and sharp eye all in the name of “neatening up” a dog.

At the end of the day, an exhibitor’s job is to present their dog in its best light, but it is the judge who makes the call in a show ring. It is his or her knowledge of the standard that guides their hands in finding a fault underneath a beautifully groomed dog, and their knowledge of the policy regarding trimming that determines what is excessive, natural, neat, or overdone.  That policy is determined by the breed clubs that write the standards.

For grins, we looked at a few breed standards to see where they stood on trimming and started with the herding breeds:

Any trimming that alters the natural appearance of a Canaan Dog is “undesirable,” and in Cardigan Welsh Corgis, trimming is not allowed except to tidy feet.  In the Border Collie, dogs “should be presented naturally, without excessive trimming or sculpting.”

The Pumi standard is a bit more specific (and helpful): “The coat stands out from the body approximately 11⁄2 to 3 inches and is prepared using a combination of stripping and trimming.”

The standards of several breeds, however, are very clear on the point of trimming as in, “no way, no how.”

In Beardies, “the coat must not be trimmed in any way.” “The Beauceron is exhibited in the natural condition with no trimming” (though interestingly, a shaggy coat is a disqualification) and in Icelandic Sheepdogs, coat or whiskers that have been altered by trimming or clipping shall be so severely faulted as to be effectively eliminated from competition. For the PONs, only the hair between the pads may be trimmed, and in the Swedish Vallhund, dogs are to be shown in an untrimmed, natural state, period.

In our own breed standard for the Puli, trimming an older dog can be necessary because the coat grows continuously as can be seen in the corded Poodles who were shown in the early days of breed competition. Gaiting can be impeded by a long coat that grows beyond the feet, but interestingly, the word “trim” doesn’t appear in the standard at all; it does, however, acknowledge that there need only be enough length to properly evaluate the coat’s quality and texture. That said, in the show world, a coated breed in full coat is a glorious sight. All things being equal, a dog in full show coat usually has the advantage over a dog of equal quality, but less or inferior coat. 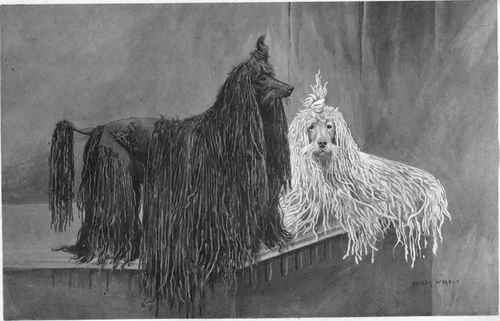 Among sporting breeds, the Nederlandse Kooikerhondje is presented with a natural, untrimmed coat, but the Flat-Coat is shown with as natural a coat as possible and must not be penalized for lack of trimming, as long as the coat is clean and well brushed.  On Golden Retrievers, excess hair may be trimmed to show natural size and contour (what, exactly, is “excessive?”) and on the Sussex Spaniel, no trimming is acceptable except to shape the foot or remove feathering between the pads, or between the hock and the feet.

Moving on to the Hound group, we see that the Afghan Hound standard directs that dogs should be shown in their natural state –  the coat is not clipped or trimmed; The Ibizan Hound has two types of coat, and both are untrimmed. The Portuguese Podengo Pequeno is groomed but not trimmed or sculpted. Again, very clear.

Trimming an American Eskimo dog will be severely penalized, as is trimming anything other than feet, pasterns, hocks on a Keeshond, but in the Bichon Frise, coat may be trimmed to “reveal the natural outline of the body. It is rounded off from any direction and never cut so short as to create an overly trimmed or squared off appearance.”

However, coat that has been trimmed is a major fault in a Chinese Shar-Pei, and if you are a Chow Chow, you can trim, but keep it subtle (“obvious trimming or shaping is undesirable). Coton owners may trim the hair on the very bottom of their dogs’ feet and between the pads, but any other trimming or sculpting that alters the natural appearance is to be severely penalized.

If you have a Dandie Dinmont Terrier, you may trim for presentation as long as the dog appears entirely natural, and in Scotties, the coat should be trimmed and blended into the furnishings to give the dog its distinct Scottish Terrier outline. Woe to the Soft Coated Wheaten terrier owner who overly trims their dog for they shall be severely penalized.

In Toys, don’t even think about trimming a Cavalier King Charles Spaniel, it’s not permitted at all. Dogs where the coat has been altered by trimming, clipping, or by artificial means shall be so severely penalized as to be effectively eliminated from competition. That standard means business! The Havanese also has a “long, untrimmed, double coat,” but the Pomeranian allows “trimming for neatness.”

We’ve touched upon only a few breeds, but how is trimming handled in your breed when it comes to conformation shows?

Our image is of the Golden Retriever from the Flonase TV Commercial, ‘Most Pills Don’t Finish the Job.’ We’d say the trimming in this case was a bit excessive.