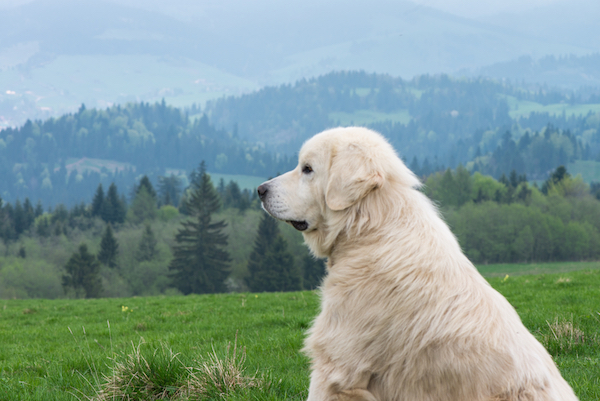 The highest peaks in the Carpathian Mountains are the Tatra range which form a natural border between Slovakia and Poland in an area called Podhale, and since the 14th century, a large white dog has been guarding and herding sheep there. More than a single purpose working dog, these dogs were all-around “handymen dogs” to the mountain people of South Poland. Their unusual coat could be spun like wool, and their plumed tails were used as a handhold by human companions needing a steady “crutch” as they traversed through snow or rough terrain. The dogs would be used to draw small carts for dairies, their haul often containing the famous salted sheep milk cheese of the area, oscypek. In the summer, pairs or trios of the dogs watched over the sheep, and if need be, the dogs gently used their immense bodies – sometimes weighing up to 130 pounds,  to guide the sheep along as they came off the mountain.

The precise origins of the Polish Tatra Sheepog aren’t known, and some suspect the breed developed from dogs introduced by the Phoenicians to the eastern world, but it’s certain that the breed hit extremely difficult times during World War II and nearly became extinct. Starvation numbers skyrocketed, and except in traditional herding areas, breed numbers plummeted. In 1954, communists seized all private property and created a national part in the Tatras. Since shepherds were displaced by the confiscation, fewer people kept sheep, and there was less need for the dog. That the breed survived this “perfect storm” of deleterious events was nothing short of astonishing, and its admirers came to call it “the breed that refused to die.”

Another “perfect storm” was forming, however, and this one was for the good. Because many Tatras were kept in Zakopane during World War II, the breed managed to survive in certain native areas.  After the war when the Związek Kynologiczny w Polsce (Polish Kennel Club) reestablished itself, studies, surveys, and shows for Tatra Shepherd dogs were organized in Kraków by Professor T. Marchlewski, Jadwiga Dyakowska, Zygmunt Ewy, Antoni Żebracki, Dr. Jan Robel, Stanisław Madeyski, Lubomir Smyczynski, Marian Szymandera, Rudolf Kryspin, Emil Okarmus, Zygmunt Danek and Tadeusz Siemianowski. In May 1954, the first post-war dog show and assessment took place in Zakopane with some 120 dogs entered, the vast majority of them actual working dogs.  After the show, a new standard was drawn encouraging other breed enthusiasts to continue working to preserve the breed.

The FCI, which had removed the breed from lists because of the severe loss in numbers, reinstated it in the 1960s. In the 1980s, an American Foreign Service Officers stationed in Poland fell in love with the dogs so much that he had three Tatras shipped home to the United States.  As it turned out, the dogs left “by a whisker” because in 1981, martial law was declared in Poland by the communist government in an attempt to crush political opposition. By 1981, the breed had spread to Canada and other countries, and that there were more people to help preserve the breed was a boon to it.

Today, there are believed to be about 7,500 Tatras world-wide with dogs in France, Germany, Belgium, Canada, the Netherlands, the USA, and of course,Poland.  There are several breed clubs abroad as well as breed sections within the bigger club, though despite having arrived in the United States almost 40 years ago, the breed is still not registered with the AKC. There is a breed club, however, and the United Kennel Club has recognized the breed since 1995 as the Owczarek Podhalanski.

We came across the following video we thought you might find interesting, a blend, if you will, of an old tradition playing out in the modern world. There were one or two heated comments left under the video uploaded on You Tube in 2009, and though Google Translate isn’t the most accurate of translating sites, we got the gist of the remarks written in Polish. One was horrified at the condition of the dogs, to which someone commented that the dogs had just come down from the mountain, had likely lost weight, and would “fatten up” again in the coming months. We lack enough information to side with one or the other, but we certainly hope the dogs were cared for.

Our sense is that the shepherds of the High Tatras are very proud of their dogs, as are the Polish people.