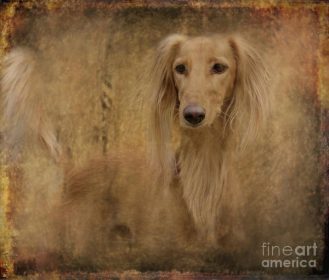 An old Arab proverb says, “He is a gentleman. He grew up with the Saluki.”

City life may have caused many Arabs to lose touch with their heritage, but recent years have seen a renewed interest in cultural traditions, and the “old ways” included the Saluki, a dog that Bedouins bred and trained for thousands of years. Historically, the dogs were used mostly for hunting rabbits and other small desert animals, often in partnership with a bird of prey. If something flew, a Bedouin used a falcon, but if it ran, he used a Saluki.

Salukis helped provide meat for a Bedouin family’s stock pot, but the family depended on their camels for milk and transport. If, at the end of a day of trekking through the desert,  the family noticed the absence of a Saluki, it meant a camel was missing. A herder with a large number of animals to look after might not spot a missing camel, but a Saluki’s disappearance was noticed immediately, and it usually meant the dog was guarding the lost camel.

Salukis were family members and prized hunting partners in a culture that regarded all other dogs as unclean. Salukis were (and are) exempt. They ate the same food as their masters,  but were also given dates, olives, milk, rice, and meat. It’s said that desert salukis were fussy eaters, and would refuse dirty water, and stale food, so their water was kept in a clay pot to ensure it stayed fresh and cool in the heat, and often times, a few drops of rose water or leqah – water flavored with palm blossoms – would be added for taste.

The English poet, novelist, and garden designer, Vita Sackville-West, once wrote that the Saluki was “a marvel of elegance.” She would get no argument on that point.