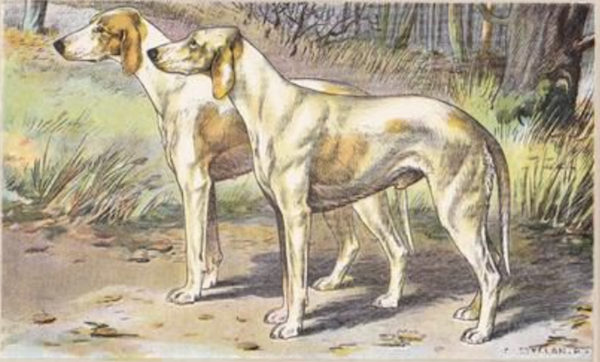 Few breeds today closely resemble the dogs from which they descended. Selection, whether man-made or natural, shaped many of the ones we see today, but there is a breed that still looks like its forefather, the Chien Blanc du Roy (the Kings White Dog), and that breed is the Billy (pronounced Bee-Lee).

It quickens the heart of a dog lover to gaze upon a dog and know that King Charles IX of France also gazed upon such dogs before his untimely death of tuberculosis at the tender age of twenty-three. Except for the whole St. Bartholomew’s Day massacre thing, we might have liked Charles; when his beloved female Billy died, Charles all but forced the Royal Court to go into mourning. Anyone who has ever lost a heart dog gets this.

In its day, the Billy was a chien de grande venerie, or hound that knew how to behave in a pack. Good thing. Grande vénerie, larger game hunting, needed large, strong scent hounds, and a typical pack consisted of 50 such dogs or more. In a chasse à courre (hunting with hounds), Billys were used with other hounds to follow prey until it literally dropped dead.

Today, France has the most hunters in Europe with 1,246,273 people in the country holding a hunting licence, and this makes it the country’s third-most popular sport. The chasse à courre still exists, and indeed, hunting package deals are being offered on-line to attend one. Tens of thousands of Frenchmen follow the sport and will go out to watch the centuries old tradition of a hunting party. We honestly don’t know if the rules of engagement remain the same, but sources say that in today’s chasse à courre, French hunters are primarily interested by the work of the hounds, and we hope that means that prey is spared the kind of demise its ancestors faced.

We found a French video of a chasse à courre, and viewed at high speed, we saw no evidence that an animal was harmed, so the age restriction puzzles us. If you find differently, please contact us so we can remove it. Click on “Watch on You Tube.”