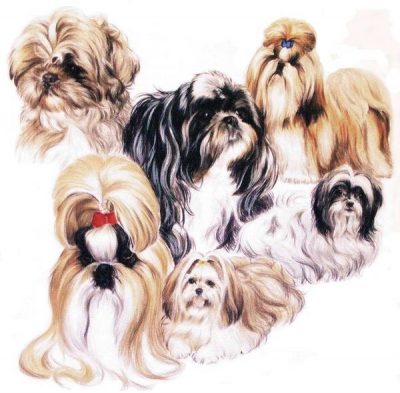 Her beauty was said to be so dazzling that when she leaned over to look at koi in a pond, fish forgot to swim and sank below the surface. Her name was Xi Shi, and the woman who lived during the end of the Spring and Autumn period in China (approximately 771 to 476 BC) was one of the Four Beauties, four Chinese women renowned for their beauty.

There is little historical record about her or the other three women, Wang Zhaojuen, Diaochan, and Yang Guifei, beyond the fact that they lived, and that each caught the attention of the ruling king or emperor in her respective era. Three of them, it’s said, brought ruin to the kingdoms in which they lived, and their lives ended tragically.  The rest of what we know about them has probably been embellished by legend.

We mention Xi Shi because a source we found does not buy into the commonly accepted notion that the Shih Tzu got its name from the Chinese term for lion dog. That source points out that the breed’s name in Chinese actually translates to “Xi Shi dog,” and that the breed was named for Xi Shi Quan because both were so beautiful. The writer adds that in proper Chinese, the moniker “lion dog” more accurately refers to the Pekingese.

In V.W.F. Collier’s book published in 1921, Dogs of China & Japan in Nature and Art, the author points out that traditional Chinese used the name, shih-tzu kou, for any long-coated dog no matter it size or origin. In so doing, Collier adopted “Shih-tzu” (not shih-tzu kou) as the name for the breed in English, and it stuck.
However, the source we referenced earlier readily admits that as a non Chinese speaker, s/he couldn’t verify with certainty the chronological history of the adoption of Xi Shi in contemporary Chinese as the breed name, or its subsequent use in English as an alternative name for the Shih Tzu. Still, it’s an interesting, if not fanciful theory on the origin of the Shih Tzu’s name. As an aside, the first dogs of the breed imported into Europe were classified by the Kennel Club as “Apsos,” but when the first European standard for the breed was written in England in 1935 by the Shih Tzu Club, the dogs were categorised as Shih Tzu, and the association of the name,”Shih Tzu” with this specific breed started in around that time to differentiate breeds formerly thought of as Tibetan.
Image: Shih Tzu Montage by Barbara Keith
http://barbara-keith.fineartamerica.com
http://barbara-keith.artistwebsites.com/
http://www.redbubble.com
http://www.zazzle.com/barbbarcikkeith