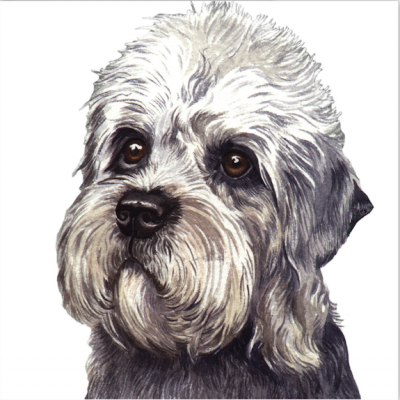 Old Mustard, Young Pepper, Young Mustard, Little Pepper, Little Mustard, and Old Pepper, these were the “immortal six” Dandie Dinmont Terriers that are still spoken of with appreciation by Dandie fanciers. They may well have been part of the pack of ten short legged terriers that farmer, James Davidson, kept in the Borders, he being one of about 30 important breeders at the time of the development of the breed.

That the breed was hunted in packs may surprise some readers. With its limpid eyes and silken topknot, the Dandie Dinmont Terrier may not conjure up images of a pack dog, but Dandie Dinmont Terrier packs date back to at least the 18th century when Willie “Piper” Allan of Northumbria (known as Northumberland, in his day) kept a pack, and while some dispute what the original stock was that was used to develop the breed, most agree that the breed originated from the dogs owned by Allan. He was a well known sportsman who, like most in his day, hunted otters, and the terriers he bred to assist him were said to be so efficient at the job that even local nobility borrowed them.  His son, James, took over the breeding program in 1779 when his father died, and as far as we can tell, much of the debate about the Dandie Dinmont Terrier’s ancestral origins stems from no one knowing with certainty what breed(s) went into the creation of his dogs.

Many books state that the DDT is a relative of the Skye Terrier, but when we asked breed expert, Paul Keevil, about this, he pointed out that there is no recorded connection between the Skye and the Dandie. Both breeds were developed independently in different parts of Scotland, the Dandie in the southeast, and the Skye on the islands of the West.  Because they both have long bodies and short legs, some authors have suggested incorrectly that there is a connection.

James Allan continued to breed his father’s dogs, and other terrier fanciers who acquired some of the Allan terriers further helped develop the breed.  Mr. Francis Sommer of Town Yetholm in Scotland became one of them when he purchased a dog named “Old Pepper.” James Davidson (the same as written of in the first paragraph) was another. Davidson’s breedings primarily used dogs from the Allans, but he brought in dogs owned by the Faas family, as well.

These early Dandie Dinmonts were mostly hunting terriers, and their prowess at going after ill tempered weasels and badgers, as well as otters and wiley foxes earned them the right to be regarded as working terriers.

2 thoughts on “A Dandie Pack”