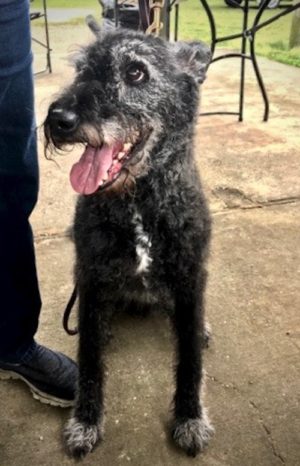 This lass puzzled more than a few people recently, and it wasn’t because she was attending the Belgian Laekenois National Specialty in Covington, Louisiana, and she wasn’t a Laekenois. The Open Shows and working title tests included in the specialty weekend attracted many different breeds, including Pyrenean Mastiffs, a Teddy Roosevelt Terrier, a Swedish Vallhund, Berger Picards and Mudik, but few people could put their finger on what this little lady was.

The catalog identified her as Ranchodutchie’d Ruw Van Der Woude FDC, an entry in the Miscellaneous Class, but as most people rarely get to see a wire-haired variety of this impressive breed, they were to be forgiven for not realizing she was a Dutch Shepherd.

Back in the day when the breed association was set up in 1898, there were six different coat varieties in the breed:

The different coats came as a result of breeding between Dutch Shepherds that had all sorts of coats, and it didn’t take long for fanciers to recognize that one of the issues that needed clarification had to do with coats. Within eight years, the six coat varieties were reduced to three: Short-haired, long-haired, and wire-haired. Frankly, there were those who felt that the wire-haired dogs had always been more uniform than the other varieties, in large part because they hadn’t been popular as breeding stock with the other varieties. The coat, however, had its fans, and for years, the quality of these dogs was stable, as it is today. It’s estimated that as of 2017, some 550 wire-haired Dutch Shepherds were in existence, a population that some think is too small to safeguard its future. For that reason, the Nederlandse Herdershonden Club is discussing with experts the notion of expanding the gene pool which could include inter-variety breeding.