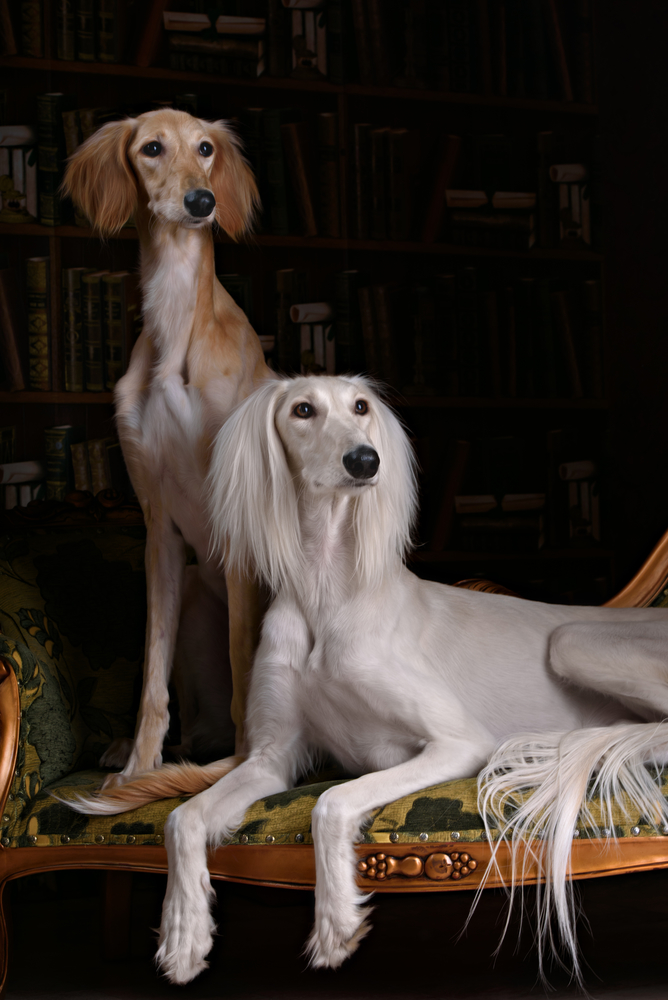 Bedouin poetry written thirteen centuries ago spoke of a wind drinker, a daughter of the tent,  and the desert eye. Lyrical words for a creature culturally regarded as impure, and yet exceptions were made for the Saluki which, in the Bedouin mind, was a hound without equal. Believed to be a gift from God to the tribes, the dogs were called hound al-ḥurr, or “the Noble One.” In fact, it was said that the Bedouin was a slave rather than a master to a Saluki. In the Arabian Peninsula and North Africa, these dogs held an honored place in a tent or in the castle of an emir, and were allowed to freely enter a space and sleep on cushions or rugs, or even with family members.

This high regard for the Saluki is what Hamad Al Ghanem inherited as a boy, and the boy grew to be a man who is a Saluki breeder, and the Registrar General and Director of the Saluki of Arabia Club. In 2002,  Al Ghanem also established the Arabian Saluki Centre in Abu Dhabi with the support of the Emirates Falconers’ Club, a good fit because historically, the Saluki and falcon were hunting partners. Indeed, in an article written by Sir Terence Clark, he described meeting Hamad al-Ghanem for dinner, and sharing their table with Al Ghanem’s falcon, “Gyr- Saker.” Hooded, of course, and quite well behaved.

Al Ghanem can boast of a stud book containing information about 1,800 dogs, a book he started in 1979 or 1980 as a way to keep track of where his dogs were going.  One of Al Ghanem’s other goals is to create a DNA database for the Salukis of Arabia. He once said, “It’s not about finding out who is the father or the mother, brother or sister of one line. With the database, if you find a Saluki you would know which line it comes from — Yemen, Syria or Iraq. We have now collected more than 140 samples. We are looking at 800 to generate the database.”

We are still trying to find a current update of Al Ghanem’s DNA project (if you know, tell us!) which would be a welcomed – and modern – source of information for today’s Saluki enthusiast because Bedouin learned and orally transmitted their dogs’ pedigrees from one generation to the next. The British writer and broadcaster, Wentworth Day, once wrote:

“…..the Arab desert tribes in the Sahara called the Saluki Barake or ‘Specially Blessed’ and referred to them always as hounds, never dogs, transmitting their pedigrees, like the Bedouin of the Arabian desert, by word of mouth from generation to generation, never selling them but giving them as presents of honour to distinguish guests and to ….. favoured friends, for to them the Saluki is el-hur, the ‘Noble One’…”

To see more photographs of Hamad Al Ghanem and his Salukis, click here.