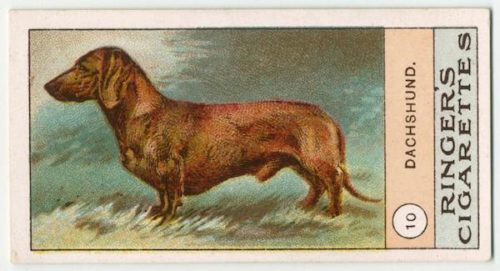 Cinephiles (those passionate about movies) will know that what the films The Bostonians, The Wings of the Dove, Daisy Miller, The Haunting of Hell House, The Turn of the Screw, and the Heiress have in common is that each was based on a Henry James novel.  Some students of literature regard Henry James as the transition between literary realism and literary modernism; some even regard James as one of the greatest novelists in the English language.

He was also a Dachshund man.

When his terrier, “Tosca” (named for Sardou’s, not Puccini’s heroine) passed away in 1899, she was succeeded in 1903 by “Max,” a Dachshund whom James described as “hideously expensive… and undomesticated…and with “a pedigree as long as a Remington ribbon.”

“I have just acquired by purchase a very beautiful and valuable little Dachshund pup of the “red” species, who has been promising to be the joy of my life up to a few hours since — when he began to develop a mysterious and increasing tumification of one side of his face, about which I must immediately have advice. The things my dogs have, and the worries I have in consequence!”

It didn’t take long for Max to worm his way into James’ heart.  A few months later, he would describe the “poignant drama” that was Max going to bed, and a few months after that, Max was “snoring audibly in the armchair.”  A year later, Max was no longer the subject of derisive jokes, but was described quite differently.

In 1904, James wrote to Louise Boit, a tenant in his Lamb House:

Lastly, I take the liberty of confiding to your charity & humanity the precious little person of my Dachshund Max, who is the best & gentlest & most reasonable & well-mannered as well as most beautiful small animal of his kind to be easily come across — so that I think you will speedily find yourselves loving him for his own sweet sake. The Servants, who are very fond of him & good to him, know what he “has”, & when he has it, & I shall take it kindly if he be not too often gratified with tid-bits between meals. Of course what he most intensely dreams of is being taken out on walks, & the more you are able so to indulge him the more he will adore you & the more all the latent beauty of his nature will come out. He is, I am happy to say, & has been from the first (he is about a year & a half old) in very good, plain, straightforward health, & if he is not overfed, & is sufficiently exercised, & adequately brushed (his brush being always in one of the bowls on the hall-table — a convenient little currycomb) & Burgess is allowed occasionally to wash him. I have no doubt he will remain very fit. In the event, however, of his having anything at all troublesome the matter with him, kindly remember that there is an excellent “Vet” a dozen miles away, who already knows him, & would come by to see him for a moderate fee on any sign made. This person is ” Mr. Percy Woodroffe Hill,”Canine Specialist, St. Leonard’s-On-Sea” — a telegram would promptly reach him.