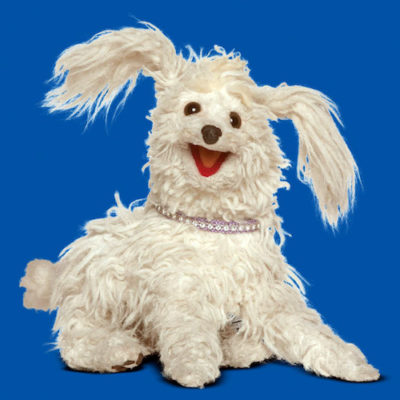 The literary world is replete with famous authors and their purebred dogs – just the other day, we posted about the writer, Henry James, and his Dachshund, Max.

The entertainment world, too,  has its celebrity purebred dog owners: Ruth Gordon and her Poodle, Priscilla Presley and her 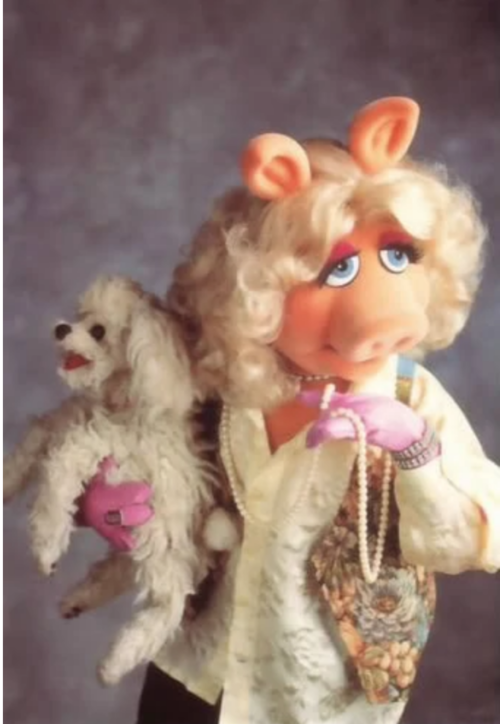 Poodle, and scores of others.  Heretofore, we’ve not written about one particular celebrity, but you know her name as surely as you know the names of other famous people who owned Poodles, and most of them, as far as we know, are not pigs.

Miss Piggy, the diva muppet Muppet with the volatile personality and fractured French punctured by karate chops is a Poodle owner.

Why would you be surprised? Don’t all cultivated porcines have a pet Poodle?

A favorite crossword puzzle clue (Miss Piggy’s white poodle),  “Foo-Foo” appeared in the fourth and fifth seasons of The Muppet Show speaking only in barks and other doggie sounds. Miss Piggy, however, encountered a problem some of our readers may have experienced.

It was the dog or her love interest.

In 2011, Miss Piggy told People Magazine that she had to “re-home” her Poodle, Foo-Foo, as the dog was “getting a little nippy” with “Kermie,” the love of Miss Piggy’s life. She explained, “Foo-Foo” really didn’t much care for Kermit… She seems to be prejudiced against green people. Anything the color green, she would nip at. So in order to have a future with my Kermie, I had to make that sacrifice.”

Piggy went on to assure People that she would be sending Foo-Foo to pet therapy, and that she looked forward to the dog overcoming its aversion to Kermit. Since Foo Foo came back in Muppets Most Wanted, evidently, therapy worked. The Foo-Foo puppet since made several appearances.