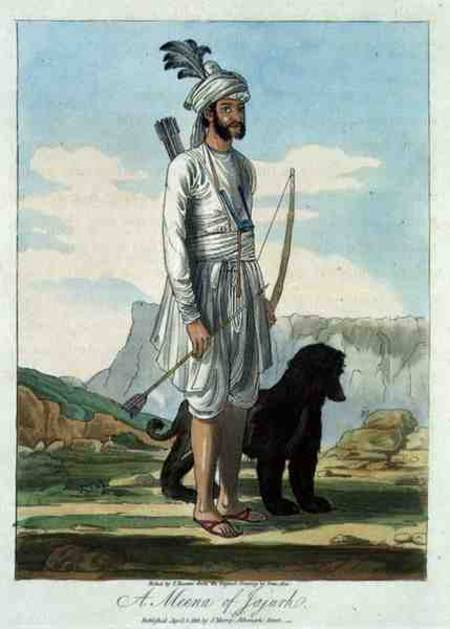 His father was the rector of St. Peter’s in Bristol, UK, but Thomas Duer Broughton didn’t choose a religious life for himself. He would grow up to became first a cadet, and later in 1797, a lieutenant in the East India Company’s Bengal Army.

While serving as commander of the British Resident’s escort in India, Thomas wrote thirty-two letters to his brother, presumably Samuel Daniel Broughton, himself a surgeon of the 2nd Life Guards. Thomas shared his thoughts and observations about military operations, noted with disgust the squabbles among his own men, and of more interest to himself, described both Hindu and Mohammedan festivals and religious ceremonies. He also reported on the native dress, manners, and daily life of the Mahrattas, a caste of people living in Maharashtra.

Thomas would publish his letters in a book entitled Letters Written in a Mahratta Camp During the Year 1809. Modern day reviewers say it’s the only British book on India to be entirely illustrated with drawings by the wonderfully gifted Indian artist, Deen Alee. Of interest to dog enthusiasts, however, is that the book is said to offer one of the first published descriptions of the Afghan Hound, and indeed, includes the first depiction of an Afghan Hound in western literature, a color plate entitled, “A Meena of Jajurh” (the Meena is a tribe found mainly in the Rajasthan and Madhya Pradesh regions of India).  In fact, in Margaret Niblock’s book, The Afghan Hound – A Definitive Study,” the author writes that the color plate in Broughton’s book is the earliest –  and to date – only pictorial record of anything resembling the Afghan Hound” in its original environment.

We found no explanation of why the Afghan Hound would be in 18th century India, however, Afghanistan and India had always been close countries, and it isn’t a leap to envision an exchange of goods. The Afghan Hound Times reports that India is important in the breed’s history because the country was the “gateway” through which the British officers exported their Afghan hounds to the UK from the late 1880’s. Indeed, an Afghan Hound named Zardin was brought from India in 1907 by Captain Bariff, and was the basis of the writing of the first breed standard in 1912.

Image: “A Meena of Jajurh” etched by T. Baxter after a drawing by Deen Alee