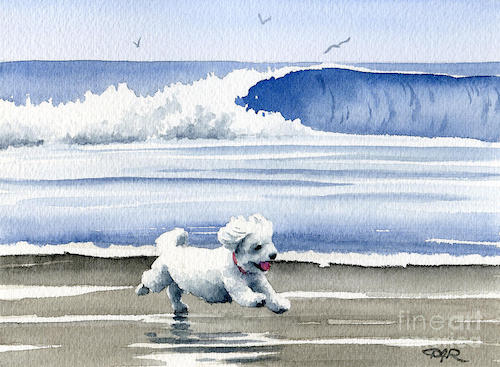 When a new breed standard for the Bichon Frise was devised in 1933 by Madame Boutovangniez, President of the French Toy Club, and the Friends of Belgian Breeders, the most vigorous debate wasn’t over points of structure or breed type, it was over the breed’s name.

The Bichon’s oldest ancestor was the Barbet, or Water Spaniel, from which the name “Barbichon came,” but “Barbichon” was an umbrella term that included four breeds: The Bichon Bolognese, the Bichon Havanese, the Bichon Maltese and the Bichon Tenerife, the latter being the primary ancestor of today’s Bichon Frise.

By 1933, the name, “Bichon Tenerife” had been dropped in favor of “Bichon a Poil Frise,” or “Bichon of the Curly Hair,” the name by which it is still known in France. Dog people being who they are, however, meant that agreement among all involved didn’t come easily, and so the breed was known by two names for a little while longer: “Teneriffe” and “Bichon.”

In time, of course, the name issue was resolved thanks to the head of the FCI’s Breed Standards Committee for the European Kennel Club, Madame Nizet de Leemans. She proposed a name based on the primary characteristic that the dogs presented, and when asked for her opinion on what that was, Madame Leemans simply said, “a fluffy little dog,” or Bichon Frise, and the name stuck.  On October 18, 1934 the Bichon Frise was registered in the Livre des Origines Frangaises as the Bichon Frise, though despite this historic decision, there were those who continued using earlier breed names well into the early 1950s.

By the way, the proper plural form of the breed name is Bichons Frises.