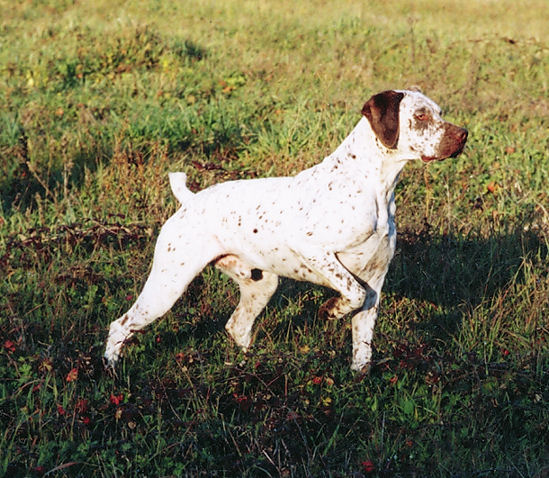 He loved to collect specimens of the natural world, and organized several expeditions to collect plants for his herbarium. He observed plants and animals in a systematic fashion, and indeed, wrote detailed notes of the day-to-day changes he observed in chicken embryos as they incubated. He even liked looking at rocks, and is credited for having coined the word, “geology.” None of this is remarkable except that Ulisse Aldrovandi’s interests occurred during the Renaissance, and today, he is considered the 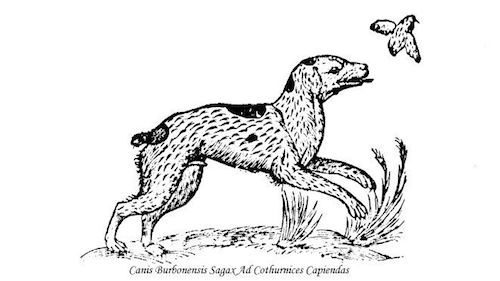 Aldrovandus produced over 100 pages about dogs that he divided by function. He added sketches of fifteen dogs (each of which always included a plant) and they included spaniel-like dogs, short- and long-haired Greyhounds, bird dogs, and one very fat dog.

One of his drawings from the 1500s is of particular interest because it depicts a dog resembling the modern-day Braque Bourbonnais. It is titled Canis sagax ad coturnices capiendas pantherinus, which means “keen scented [spotted] dog for catching quail.” In one of his manuscripts, Aldrovandi also makes note of a Canis Burbonensis – meaning “dog from Bourbonnais” –  and this is likely the earliest evidence we have that establishes the Braque Bourbonnais ( (pronounced brock-do-bor-bon-NAY) as one of the oldest short-haired pointing breeds of France, if not Europe.

Long time readers will remember that the word “Braque” is derived from a French verb which means to aim or point, and as a noun, it can be translated as “pointer.” Bourbonnais, of course, reveals the breed’s origins as the Bourbonnais region of France, and thus we have the Pointer of Bourbonnais.