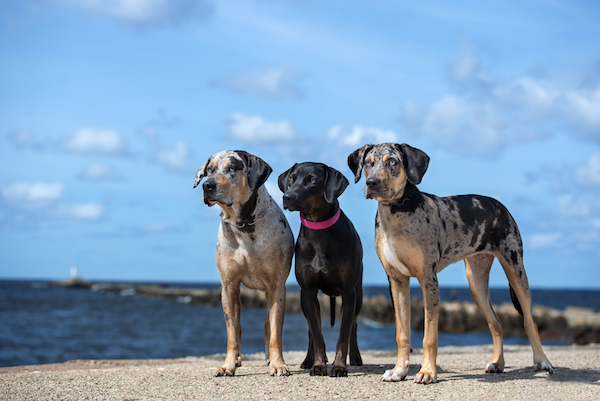 Some Catahoula Leopard Dogs have what’s called a “spotted-up” coat – what others might call a “leopard” coat. Despite the breed name, however, not all Catahoulas have leopard coats, some have a solid color, and this diversity within the breed is part of what makes it distinctive.

Catahoula coats are impacted by the merle gene, a dominant gene that creates varying tones within a specific color as well as a dilution of solid colors. And yes, a merle gene also impacts the coats of Collies, Shelties, Dachshunds, Australian Shepherd, Great Dane, and other breeds with a mottled coat in their gene pool.

Unlike the other breeds, however, DNA research has revealed that in the Catahoula, there are modifiers of the merle gene that that not only makes merle appear differently, but also seem to reduce deafness.  Many colored dogs with normal hearing have been DNA tested and found to be double merles.

These same tests have lead to a theory that there is a huge amount of the phantom merle allele within the Catahoula breed. This means that many dogs that look solid colored (and therefore are thought to be non-merles) really are merles. These dogs are called “ghost, phantom, or cryptic” merles, and there’s only one way to know for sure what they are: DNA testing.

Breeding in a merle breed can be tricky, and not knowing with certainty whether a solid colored Catahoula is really a non-merle can lead to a breeder unwittingly breed a merle to a merle. DNA testing can identify merle and non-merle, and such testing seems to us to be a boon to a breeder who may want to have all their potential breeding dogs DNA tested.