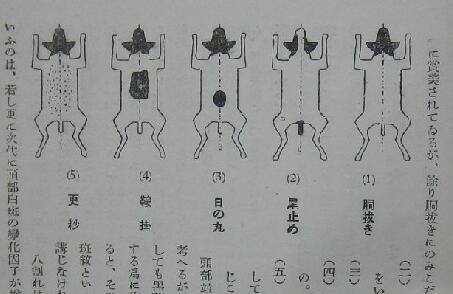 It’s a little unnerving to see a dog’s conformation presented in this way (it’s a little too much like a bear skin rug), but it is descriptive. This illustration for the Japanese Terrier came out of the book, “日本犬の研究”  (translated: Research of the Japanese Dogs”) by Seikoukan, and it touches upon the black saddle found on the backs of some terrier, a spot called “hinomaru,” or “rising sun,” in reference to the Japanese flag.

Smooth-haired Fox Terriers were imported to Japan from the Netherlands in the 17th century and bred with small Pointers and native dogs, and from these crossings emerged the Japanese Terrier, its breed “type” set around 1930. It’s possible that the saddle is inherited from the Pointer or Fox Terrier.