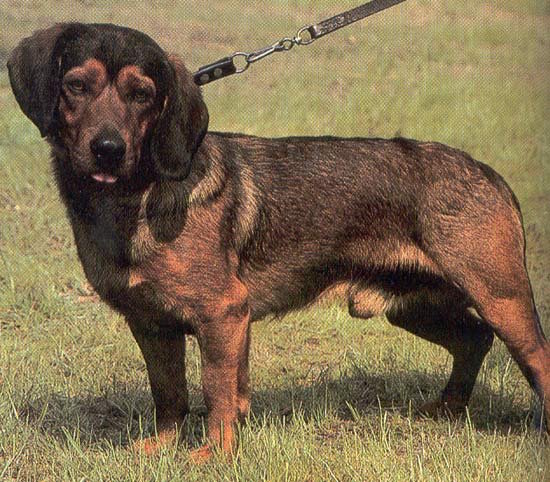 Outstanding qualities have earned the Alpine Dachsbracke the nickname, the “multiple utility dog of the Alpine hunter,” and it’s a mouthful, but then, this is a lot of dog in a little package.

Austrian hunters wanted a dog that could withstand the harsh (and quick to change) climate in the high altitude of the Alps. They wanted a a low-maintenance coat, and also a self starting dog with a great nose that could slow track game by following a cold trail. It’s likely that some jokester also wanted a dog that could make comforters out of eider down, but wisely, the creators of the dog known in Austria as the Alpenlandische Dachsbracke quit while they were ahead.

From the Austrian Black and Tan Hound, this “new” breed (it was developed in the 19th century) got not only its iconic scenting ability, but the durability to function at a high level in the high altitude of the Alps. The Dachshund gave the Alpine Dachsbracke it’s short stature, courage, determination and an exceptionally high prey drive. By 1932, the success of the breed in earning the respect of hunters lead to it being recognized as only the third scent hound breed by the top Austrian canine organizations of the time.

In 1975, its name was changed from Alpine-Erzgebirgs-Dachsbracke to Alpenlandische Dachsbracke (or Alpine Dachsbrake) in English when FCI recognized the breed and declared Austria to be its country of origin. The Alpine Drachsbracke was also recognized by the United Kennel Club in 1996.

It’s not hunted as much as it once was, but its entertaining “forever puppy” personality and gentleness with children had given it a new roles as fabulous family dog. Some predict that once word gets out,  its background, similar use as a scenthound, and a winning temperament will make it an Old World version of the popular Beagle.

Image from Pinterest and happily credited upon receipt of information