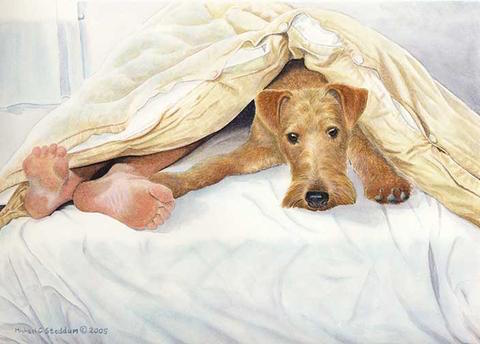 Two people are a pair. Add an Irish Terrier, and now you’ve got a party.

Inherited from a generation that knew the Great War is the breed’s nickname, “Mick,” a term of affection for the breed (but considered a pejorative by some Irish folk). The breed has also been called, ‘The poor man’s sentinel,” “the farmers friend,” and “the gentleman’s favorite,” but all describe an enormously charming dog that brings out a sense of humor even in the most dour of individuals.  It’s hard not to get enchanted with a breed described an early breeder, William Graham, as the only dogs “not itemized in Noah’s list of the cargo of the Ark ….as it was quite unnecessary to take a pair of Irish Terriers aboard, they could swim alongside so well.”