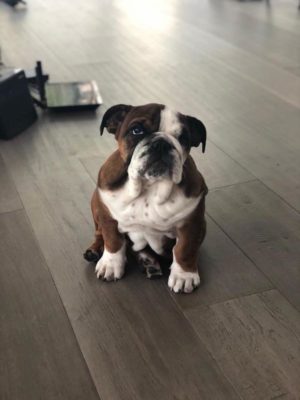 We spotted him watching a conformation ring at a recent Westminster Kennel Club Dog Show, but most people first saw actor, Dennis Quaid, either in the 1979 coming-of-age movie, Breaking Away, or as astronaut, Gordon Cooper in the fabulous historical drama, The Right Stuff. If he didn’t demand attention in those movies (which he did anyway, actually), his famous grin sealed the deal in Bonnie Raitt’s steamy music video for the song “Thing Called Love.” Check it out:

As it happened, Quaid was a good buddy of Bonnie Raitt’s, and during pre-production of the video, she said that if he would star in the video as her boyfriend, she felt she could act more flirty than if she tried to act like that in front of a camera because she wasn’t used to videos. It worked.

These days, people can watch him on Amazon in the riveting series, Goliath, but at this point, we circle back to dogs and Quid’s lifelong affection for them.

As a child, Quaid moved from one Houston suburb to another, and his only constant companion was “Gertrude,” a Basset Hound he loved until he was 19 years old. “I still get choked up when I think about her,” the actor, now 65, said of Gertrude.

A 2003 Architectural Digest feature on Dennis Quaid’s Montana ranch included images of Dennis with his dogs, Henry and June, a pair of Chocolate Labrador Retrievers, along with his other dogs, Slim and Clyde. More recently, Quaid can be seen with his English Bulldog, Peaches whom he takes everywhere –  including the set for Goliath. Quaid said in an interview with the Los Angeles Times: “We’ll be rolling film, and she’ll be underneath [the shot]. She became like the mascot. Everybody falls in love with her.”

As a dog lover, it was all the more mortifying to Quaid when his 2017 film, A Dog’s Purpose, was met with controversy over accusations of mistreatment of dog being forced into churning water. Independent third-party findings determined that animal rights activists had selectively edited footage to be misleading. An independent animal-cruelty expert concurred and added that preventative safety measures were always in place to protect the dog.

Image: Peaches, from Dennis Quaid and the Sharks‘ Facebook page