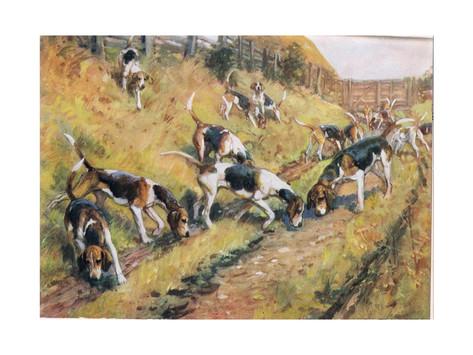 Guess what? There IS such a thing as a “paddywack.” It’s the nickname given to the nuchal ligament (“nuchal” means “attaching to the nape”) found in the midline of the neck of a sheep, horse, or cow that relieves the animal of the weight of its head as it grazes. Once upon a time (maybe even now) dried paddywack was commonly packaged and sold as a dog treat, but we digress.

Dogs also have a similar ligament in their neck (though it’s different in precise structural detail). As early dogs evolved longer legs, noses and necks, they needed the nuchal ligament to conserve energy while running long distances with their nose to the ground as they followed scent trails. It supports the head without using muscles and saves the dog energy while making her more efficient.

All dogs’ necks have five primary muscles and that nuchal ligament. Together, they’re responsible for the extensive movement of a dog’s head, as well as for maintaining posture. In many scent hunting breeds, the neck is hard muscled, powerful and strong – but is their nuchal ligament different in any way than, say, a lap dog? We honestly don’t know, and perhaps a veterinarian or canine physiologist can help us out?