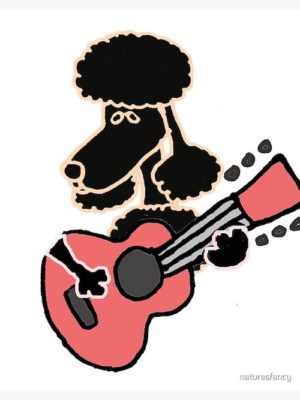 Walking down a concourse to reach a gate, it was hard for us not to notice a small crowd gathered around a figure we couldn’t see, so, of course, we had to see.  And there he was, this guy:

It was a “pinch us” moment. Standing a mere two feet from us was the Godfather of Soul, the Hardest Working Man in Show business, Soul Brother Number One, The Minister of the New New Super Heavy Funk, and Mr. Please Please Please, himself. When you’re a musical legend, you earn a lot of nicknames. 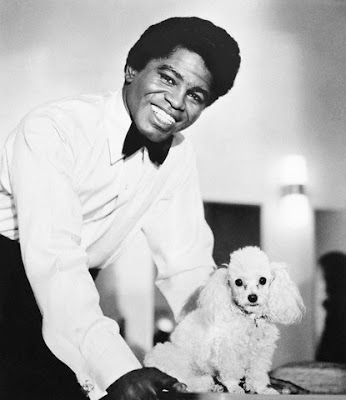 In a career that lasted over 50 years, James Brown influenced the development of several music genres. He is considered the inventor of funk, and the grandfather of hip-hop.

The one moniker we wouldn’t have expected for this icon, however, was Poodle Man.

The Brown family dog was a Poodle named, “Poojie,” whom Brown really loved.  One morning while Brown was at the dining room table and feeding Poojie tidbits, the maid pushed open the swinging door to the kitchen which Poojie never saw coming as he was on the other side. It hit his head and cracked it. A week later, Poojie died.

In the book, The One: The Life and Music of James Brown, by RJ Smith, the author writes, “Brown loved that dog, and laid the poor thing to rest in a lavish white casket with hand-painted nails. Then he staged a full-scale funeral at the house. The family was all there, and aides and employees of his radio station, everybody careful to dress appropriately for a state ceremony.
Danny Ray was there, and when Brown broke down, inconsolable before
the dog lying in his sarcophagus in the kitchen, it was Ray who tenderly
placed a hand on Brown’s shoulder, whispering in his ear, finally
dropping a cloak over Brown’s back.”

Rather than end on a sad note, we end with a cringe-worth utterly dated video of “I Feel Good” from earlier in Brown’s career. We only include it because: 1) We can’t get enough of the song, and 2) a trio purebred dogs make an appearance:

Image of James Brown with his Poodle found on Pinterest, but is believed to be Michael Ochs. Image of Guitar Playing Poodle in watercolor on textured 4 ply art board is available here.

7 thoughts on “A Music Legend and His Poodle”