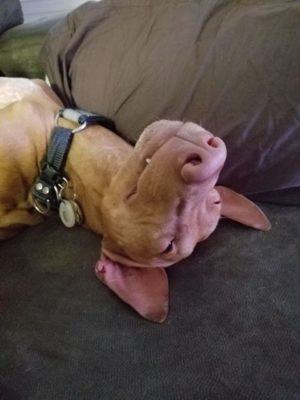 “Man is the only animal that blushes — or needs to.” Mark Twain.

With respect to Mark Twain, he was wrong, and Howard Ogden knew this when he wrote,  “The Pharaoh hound is the only breed of dog that blushes – or needs to. Pharaoh hounds have filthy minds.”

Even Oden was incorrect, however, in advancing the notion that the Pharaoh Hound is the only breed that does this. In fact, the Ibizan Hound also blushes, and both breeds do this when happy. excited, or feeling unbelievably good. In the case of the dog seen here, “Zeke,” his owner, Martin, tells us that two people were giving Zeke belly rubs at the time the picture was taken. When we saw it, we had to share it even though we’ve written about this breed’s blushing before. The photo is, we think, the best example we’ve seen on a rosy glow spreading all across the ears to the nose.

While not every Pharaoh Hound will exhibit a “Pharaoh Hound grin,” every Pharaoh Hound blushes because the breed has no black pigment in its skin, the same pigment that gives other dogs their black nose or pads. They are liver dilutes, the recessive gene affecting liver eumelanin to a greater extent than black eumelanin.

One thought on “A Need to Blush?”