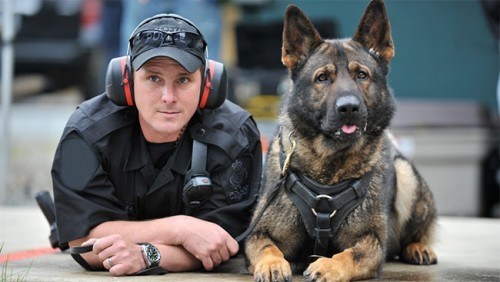 As early as 1908, Royal Canadian Mounted Police Force members used their own dogs to assist in searching for individuals, and even then, only occasionally. One of the first Western Canadian police agencies to introduce police service dogs was the Alberta Provincial Police in 1919.  Those dogs, however, were limited to tracking, and they were a functional unit for only a year.

The Mounted Police continued to use privately owned dogs until 1935 when the Royal Canadian Mounted Police dog section was formed, and three German shepherds named “Black Lux,” “Dale of Cawsalta,” and Sultan” were the first acquisitions. Two years later, Commissioner MacBrien ordered an RCMP training school for dogs and handlers to be established at Calgary because he’d seen the value of the dogs in police work.  In 1940, the RCMP won its first case involving evidence gathered through the use of a dog. The dog involved was “Black Lux,” the son of “Dale of Cawsalta.”

By the 1950s, the RCMP had German Shepherds, Schnauzers, and Doberman Pinschers in service, and in 1965, the CMP Police Dog Service Training Centre was established at Innisfail, Alberta.

As of 2009, the Royal Canadian Mounted Police continued to use only purebred (and mostly male) German Shepherds for General Duty teams, though other breeds may be used for Specialty Detection teams including the Belgian Malinois.  In the GSDs and Malinois, the RCMP finds what it considers the necessary qualities for police work: Strength, courage, adaptability, versatility, and an ability to work under extreme climatic conditions.  That said, a dog entering the RCMP training program still has only a 17% chance of succeeding because of necessarily high standards.  Dogs start their police training program when they’re between 12 to 18 months old, and while basic training is around seventeen weeks long, training never really ends as daily practice is a way of life.

In 2017,  Canadian forces had approximately 170 RCMP dog teams across Canada and it continues to grow as more and more Canadian municipalities are seeing the value of police dogs.  That same year, the RCMP started training its Police Service Dogs to detect fentanyl, and the video below offers a glimpse:

As of this writing, there are currently over 400 names on the waiting list for police services dog training.

Note: “Maintiens le Droit”  (“Uphold the Right”) is the official motto of the Royal Canadian Mounted Police,  but the expression “They always get their man,” which has been associated with the force since 1877 has no official standing. We prefer it anyway. Just saying.