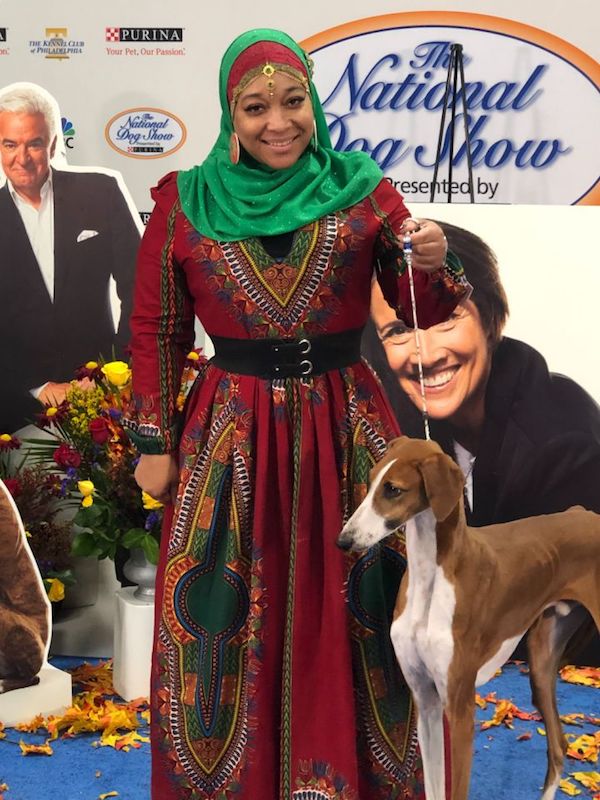 The Azawakh is the only breed recognized by the AKC that is taller than it is long, but at the National Dog Show this year (televised yesterday on Thanksgiving), there were a couple of other unique highlights associated with this breed.

The only new breed entered at this year’s National Dog Show was the Azawakh, and it was handled by friend of National Purebred Dog Day, and former Philadelphia police officer, Aliya Taylor.  She was also the only handler wearing a hijab as she is one of just a few Muslims showing her dog in the fancy. Aliya mentioned that a number of Muslims came to the show to just talk to her and thank her for representing, and perhaps more will be encouraged to show their dogs.

Yahoo Sports did a lovely feature on Aliya and her dogs, a breed that some cynologists think just might be the oldest breed known to man, approximately 10,000 years old.  Highly intelligent, and independent in their thinking, they are exceptionally sensitive to their people, and can sense pain, discomfort or changes in their owner’s psyche or physique. Many owners regard living with an Azawakh as a privilege, in part because they can be so misunderstood by anyone who thinks they are like any other dog. That, they are not.

We think it’s fitting to end with a poem Aliya wrote about her breed a few years ago. We thank her for allowing us to share her photo, her poem, and her experience from the National Dog Show:

The lithesome gait
Distinctly feline
The curves and angles so sublime

Feral, wild, free…
The ancient knowledge, sands of home
To which his royal ancestors roamed