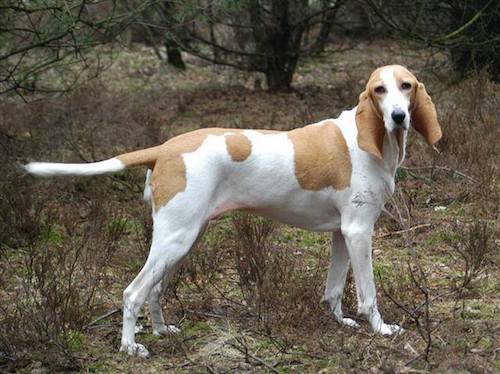 Are you familiar with the Swiss Hound?  It is an ancient breed that was influenced by French hounds brought to Switzerland by mercenaries.

There was once as many as five varieties of Swiss Hounds, all of them very old, and all of them dating back to the 1400’s. In fact, it’s said that hounds from Switzerland (Laufhunde) are among the oldest members of the Hound group anywhere.  The Swiss Hound was one of them, but a breed club wasn’t formed until 1903. If the club was intended to bolster the breed, it came too late. Long before the club’s founding – in the 1890s –  the breed was already suffering declining numbers.

As they say, for every action, there is a reaction. Breed numbers plummeted because parts of Switzerland forbade hunting with the hounds because their working style damaged fields and crops.  Going into the 18th century, there was also the “French Revolution Effect.”  The motto, “Liberty, Equality, Fraternity” was felt by citizens in Switzerland, as well, and that lead to Swiss aristocrats having to share their hunting rights with the populace who didn’t have these dogs, nor, can it be said, did they want a breed associated with the propertied.

In 1907, an appeal was made to save the Swiss Hounds from extinction, and in part, the breed was saved when the breed club bought quality Swiss Hounds and gave them to prudent breeders and huntsmen. Also helpful was exporting some hounds to Scandinavia. Add to this prudent breeding, as well as by regulations that respected landowners; these statutes stipulated that only one dog could be used to hunt at a time. It also called for dogs to be under control when searching for game, and that dogs that disappeared while hunting had to return to their master within half an hour. Finally,  dogs had to return to their person as soon as the hunt horn blast was sounded.

Common sense lead to better footing for a breed that deserves to flourish. An independent and robust hunter with a noble air, at home this is a friendly, gentle, quiet breed who is marvelous with children.

The Swiss Hound was recognized by the United Kennel Club in 2006.