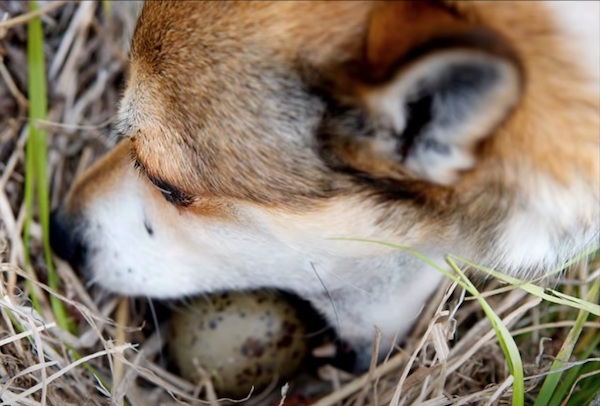 Puffin hunting is now illegal in Norway, and the only places where the sea parrots can still be hunted is in Iceland and the Faroes. When it was legal in Norway, it was a job traditionally performed by Norwegian Lundehunds belonging to farmers for whom the birds were an important source of food.  The feathers were used to stuff pillows and bedding, sell as an addition to the meager income scratched out from fishing and farming, and remaining meat parts were fed to the dogs.

This is an old breed! The first reliable mention of the breed goes back to 1591 when a tax bailiff visited Værøy and noted that “one cannot easily retrieve the birds from the depth without having a small dog accustomed to crawling into the hole and pulling the birds out.”  Over generations, success on the job favored the dog that could scamper over rocks, squeeze into narrow burrows, pull out live puffins, and come back out with the birds none the worse for wear, physically, anyway.  Lundehunds that got stuck in tunnels didn’t survive to pass on their genes, and today, the breed retains its remarkable flexibility, six fully developed toes on each foot to provide traction, and the ability to literally close their ears.

Lundehunds don’t have their old purpose anymore, and the odds of any of us getting to see them perform their old role is remote, if not impossible (and illegal). We, however, have always adhered to the notion that breeds that have been edged out of their traditional jobs can be repurposed, and by golly,  the Lundehund has been by………….airports!

Tromsø Airport in Norway has recently used the Norwegian Lundehund to gather seagull eggs. Gathering the eggs and preventing them from hatching reduces the number of birds, and that helps reduce the risk of potentially deadly airplane bird strikes.

Watching the dogs at work offers an insight to how soft-mouthed they really are. Turn down the volume in the video below (unless you love “Who Let the Dogs Out” full blast), and about 45 seconds after a series of still photos, you’ll see some action:

The program has proved to be incredibly effective. Three Lundehunds work independently, but in close proximity to their owner as they locate nests and “borrow” the eggs. A new job!

This is good news for one of the oldest breeds in the world that is recovering from near-extinction. In 1963, only a handful of dogs remained, and now there are thought to be over 1,600.