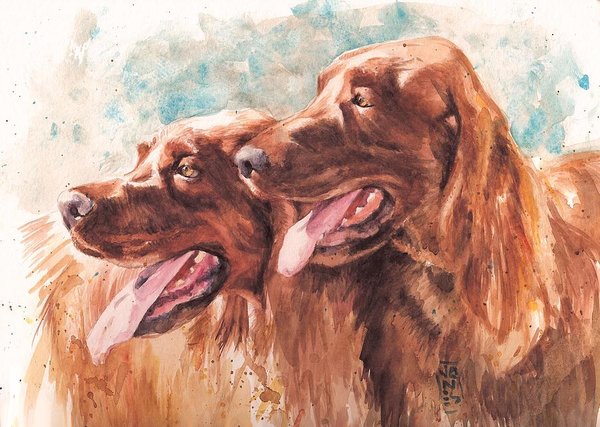 Back in the day, hunters relied on “setting spaniels,” dogs that would quickly and quietly drop to their belly (or “set”) when they found birds. The hunter would cast a net over the birds to trap them (and sometimes the dog, as well). When guns replaced nets in the early 19th century, hunters needed a dog with a more upright pointing style because a crouching setter was much harder to see, and unfortunately, easier to shoot by mistake.  The Irish Setter was such a dog, a breed said to be the most “pointerlike” of all the setters.

Fast forward to the 21st century, and we find that the breed is sometimes painted with a broad brush, and not in a good way. An unkind perception of the Irish Setter can exist among hunters: “The dog that can get lost at the end of a leash,” or, the “Irish airhead.”  Some sportsmen are persuaded that the show world bred the hunting instincts out of what had been a fabulous field dog (and the 1962 Disney movie,”Big Red,” didn’t help). Perhaps this was true of dogs bred without attention to purpose and conformation.  Heritage/preservation breeders, however, are mindful of creating the next generation of a breed that can do the job for which it was created, even if an eventual owner isn’t inclined to, say, hunt. There’s much to be said for a dog that can do the job if called upon.

There are too many dual champion (field and show) and champion-with-a-hunt-test-title status Irish Setters to dismiss the entire breed as “hunting has-beens,” though admittedly,  a split between “show” and “field” dogs may exist which we lament. That said, there seems to be a renewed interest among show exhibitors to see if their dogs have the instinct to hunt, and we’ve been hearing of breeders tapping into dual or field lines with their own show dogs to reestablish “birdie” instincts for hunting.

We came across reference to another type of Irish Setter that is somewhere between a show bred and field bred dog. Often referred to as old hunting stock Irish Setters, these dogs harken to the same early bloodlines as show dogs, and the purebred portion of the pedigrees. Instead of selecting for the show ring, however, breeders bred for good hunters for generations; the result was a reliable hunting dog that is purebred Irish Setter, but wouldn’t fare well in a show ring.  These breeders/owners aren’t typically involved in show or field competition (oftentimes their dogs aren’t suitable for either), but they do their own thing with their dogs which is to hunt.

Can we hear from Irish Setter owners whose dogs have titles at both ends of their name?

Image: “Two Redheads” by Debra Jones is available as fine art, and in home decor and lifestyle items here.

9 thoughts on “Can This Dog Hunt?”

An excerpt from Holland’s Magazine in 1926 read: “... that odd little chunk of canniness, merriment, sadness, joy, steadfast devotion, courage and rare powers of discrimination [is] the Scottish Terrier. The old Highland saying that “guid gear goes in mickle bundles,” might well have been fr...