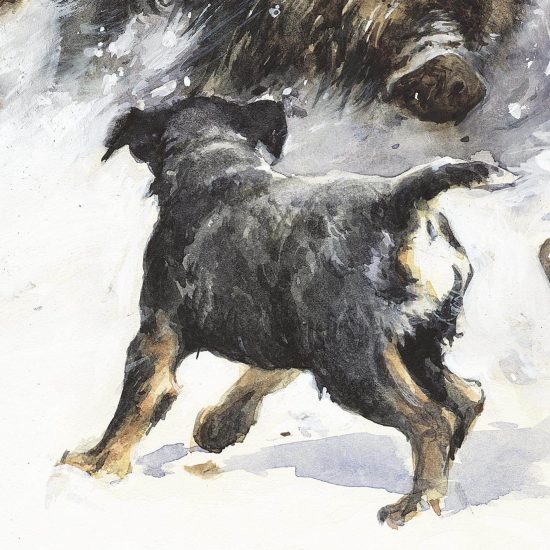 The Tasmanian Devil is the largest carnivorous marsupial in the world. This thick-set, squat built critter will feed on whatever animal is available – reptiles, amphibians, bugs,  even sea squirts are fair game to a “Tassie,” a critter the size of a badger with the reputation of the creature from the movie, “Alien.”  For its size, a Tasmanian Devil has the strongest bite of any mammal in the world: Enough force to crush bone. Incredibly, their oversized heads allow them to open their jaws up to 80 degrees wide, fractionally less than what a T-Rex could manage. A Tasmanian Devil can bite through the strongest of metals, and has been known to break the cages of livestock and other animals which they devour. Every. Last. Part.  Oh, and a Devil can eat up to 40% of its own bodyweight in one day.

Needless to say, the Tassie has a formidable reputation, but the cheeky little devil does have a PR problem, and it starts with his name. Tasmanian Devils were “christened” by the first European settlers who entered Tasmania and began hearing unearthly, blood-curdling shrieks and growls from deep within the bush. Understandably, it freaked them out, and they imagined that demons surrounded them in the dark wilderness. In truth, the strange sounds that a Devil makes is to scare off other animals because it wants to avoid fights. They are actually shy, timid animals not dangerous to people unless they are attacked or trapped, and when they do feel threatened, the ‘yawns’ they exhibit that look quite fierce are more of a display of fear and anxiety than aggression.

It’s tempting to compare the Tasmanian Devil with the German Hunt Terrier (better known as the Jagdterrier) when descriptions of the dog paint it as the purest hunting canine-machine on four legs. Yes, it is possible that anecdotes about the breed grow more fantastic with each telling, but we’ve come to trust individuals who have actual experience with a breed, and when Richard Reynolds tells us something, we believe him.

In our view, Richard is ten of the most interesting dog people most of us could ever hope to meet. An AKC certified dog show judge in his “day job,” by night, Richard runs a volunteer group of rat-hunting dog-owners known as R.A.T.S. to help New York City deal with a big problem: In 2021, the city recorded one death and fifteen cases of leptospirosis, a rare disease comes from exposure to rats. 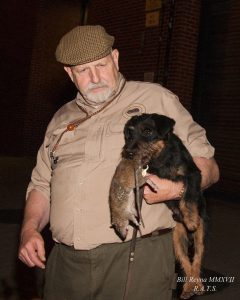 In an interview with Dan Sayers, Richard said that that some terriers are working terriers……………..”and then there’s the Jagdterrier” (pronounced yockt-terrier).  A formidable hunter with an energy level that puts other terriers to shame, the Jagdterrier “is a devil on the trail and a demon in a hole. Hunting is his birthright and he often bears the scars to prove it.”

As Richard told us later, most Jagd breeders will only sell to someone with a proven history of hunting. The breed is not something for most people.

By most accounts, one can’t be soft with a breed that respects authority and responds well to a leader who asks a lot out of them because Jadgs are so mission-driven. Generations of predator hunters are in their genes, so their natural inclination is not to let go of something that is in their mouth, or even in their sights because originally, they were used to pursue bobcats, foxes, badgers – even cougars. It’s probably an understatement to paint the breed as a fierce hunter in a small package, but that is mostly when the dog is “on the job.” Well bred Jadgs are family friendly, happy to play, and disinclined to display inappropriate aggression.

Some people who own a Jagdterrier probably shouldn’t own anything with a pulse, but for hunters and individuals who appreciate a high energy working terrier and know that these dogs need a job, it just might be the perfect breed.

To learn more about the breed, be sure to catch Pure Dog Talk’s Laura Reeves’ interview with Richard from 2020 here,  and read Dan Sayers’ interview with Mr. Reynolds for Showsight magazine here.

Image: Detail from author’s print of “Hunting with Jagdterriers” by Valery Siurha is available for purchase here