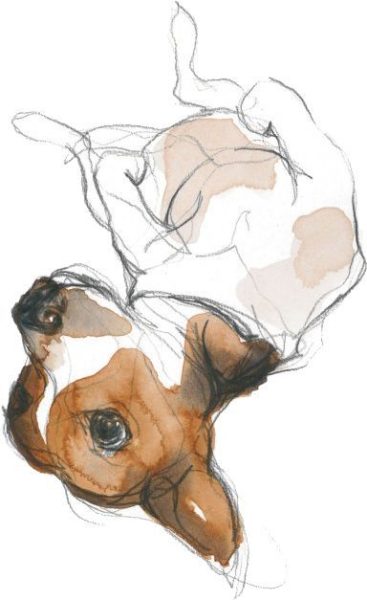 It is known the Russell was born into a religious family that lived in Dartmouth, England, and while some accounts say that the Russells were a hunting family, other sources suggest that Russell was bitten by the hunting bug following an invitation to hunt with a group lead by the late Earl of Fortescue.  That one foray lead to a lifelong obsession with hunting, an activity that would occasionally be at odds with his life as an ordained minister.

Regardless of how Russell came to be a hunting enthusiast, we know that he developed a keen interest in the dogs used by fox hunters, specifically, the Fox Terrier. In those days, the Fox Terrier was considerably different than it is today. Slender, lanky, and taller, the dogs were also predominately black, tan or reddish brown, colors resembling the fox. Russell wanted to improve on the breed by developing a terrier that couldn’t be mistaken for a fox because of its coloring. His vision was a dog that would “worry” a fox into bolting from its den, not maim or kill it, so that the fox would take its chances above ground. Russell wanted to keep “sport” in the sport.

There are many books about how Russell set about improving fox terriers, and how a white terrier bitch named, “Trump,” became the foundation for his breeding program. We leave the details to those sources.

We know that by the 1850s, Russell’s dogs were recognized as a distinct type of Fox Terrier. The Reverend helped write the breed standard for the Fox Terrier (smooth) which remained relatively unchanged by the dog fancy for over a hundred years. He became a respected judge, and was a founding member of The Kennel Club. In between the “bullet points” of his life, Jack Russell had his ups and downs. He married well, but his expensive sporting habits put a dent in the substantial resources of his heiress wife, and finances were often strained. His passion for sport cost him promotions and positions of influence in the church. Still, Russell’s friendly nature won over even those who disapproved of his life choices.

We know that Russell died in 1883,  and that he is buried in the churchyard at Swimbridge. A village pub was renamed the ‘Jack Russell Inn’ in his honor.

What many do not know about Jack Russell are the circumstances of his passing, an account that we came across in Don and Kellie Rainwater’s book, The Jack Russell Terrier Canine Companion (or Demon Dog).

We paraphrase. By the spring of 1883, Russell was living on a family homestead named “Black Torring.” He had been involved with Fox Terriers for over six decades, and for reasons unknown, one day he gathered all his important papers together and took them outside to the porch of his house. They included his sermons, records, and paperwork documenting his breedings. A few hours later, one of his sons came to visit and found hundreds of pieces of paper blowing in the wind, wafting through the trees, and scattered about the property. Though the family tried to recover the papers, many of the documents were lost forever, and pinpointing some of the details of the breed’s early history were gone forever.  Jack Russell had died of natural causes, his life’s work spread out in front of him on a veranda.