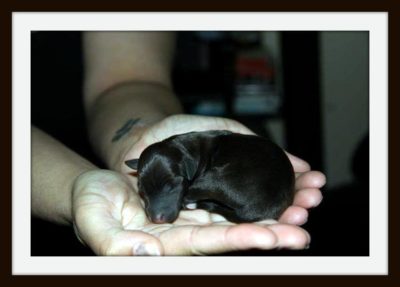 The precious baby in the picture is a wee Italian Greyhound, and in the course of trying to find unusual information about the breed, we discovered “math rock.”
As a rule, we stay as far away from algebra as we can because encounters with higher numbers never end well for us.  Still, when we read that “Shellac,” an American math rock band, named one of their albums Excellent Italian Greyhound in honor of that breed, we were intrigued. One doesn’t often associated an Iggie with indie rock, but the greater question for us was what on earth is “Math Rock” (and should we be afraid?)
A listen is worth a thousand words, and the video below is a track from that album:
In a nutshell, math rock is a fusion of distorted guitar riffs of punk and hardcore, and the metrical asymmetry associated primarily with 1970s progressive rock (and we totally borrowed that last part from this review of math rock). The style that dates back forty years is characterized by odd time signatures, a fair amount of irregular stopping and starting, and often, dissonant chords. It’s the music a lot of our parents would say isn’t music at all.
As for the “Excellent Italian Greyhound,” it was Shellac’s fourth album released in 2007 and was named after drummer, Todd Trainer’s, Italian Greyhound, “Uffizi” who appears on the album cover.  Sadly, Uffizi passed away in 2016, but you can see him with his owner in happier times in the video clip below (fast forward to the 2:55 mark) that does a nice job of sharing this pair’s special relationship:
Our “baby picture” belongs to Melissa Richards‎