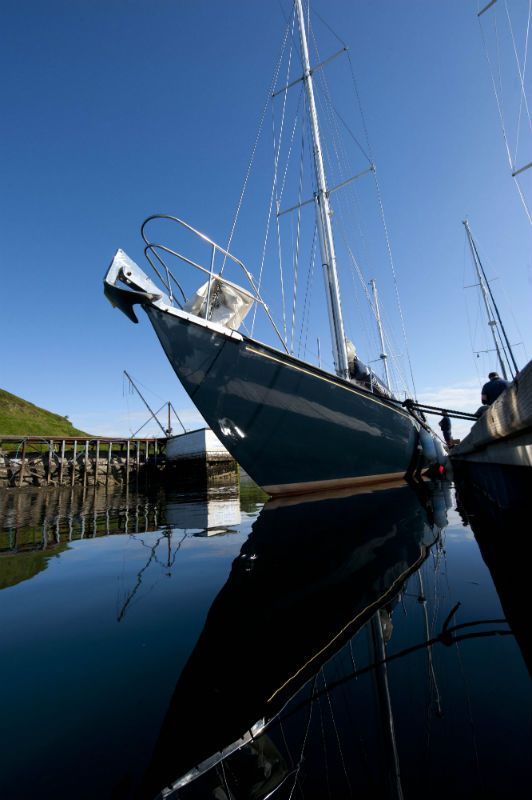 When Prince Charles and Princess Ann learned to sail, it was on one of the most successful ocean racing yachts ever built, a vessel that had won scores of races from the south of England to Bermuda across the Atlantic. In dog terms, it would have been like learning how to stack a dog and perform a triangle with Ch. Bang Away of Sirrah Crest, the greatest Boxer ever to step into an American show ring.

The yacht was designed by Charles E. Nicholson and built in 1936 by the famous Camper & Nicholsons yard in Gosport, the original luxury yachting company since 1782. She was 63 feet long, had a permanent crew of three, and one of the skippers during the Royals’ ownership was a descendant of Sir Francis Drake.

Already a keen sailor when she was purchased in 1962, Prince Philip had a lot of success competing with her at the famous Cowes Week Regatta around the Isle of Wight.  When “the kids” weren’t learning to sail her, she was chartered to yacht clubs across the country which exposed thousands of people to offshore sailing.

In 1969, she was sold which effectively retired her from racing. Sadly, she fell into considerable disrepair and very nearly became unsalvageable, but in 2003, yacht surveyors and classic yacht restorers, Tony and Cindy McGrail, bought her and restored her over the next several years to her original pristine condition.

In 2010, she was purchased by The Royal Yacht Britannia Trust and is now berthed alongside the Britannia, the Queen’s royal yacht from 1954 until 1997. Occasionally, she’s available for day charter by those keen to step back in time aboard a piece of royal history, and a treat it must be. Take a look at this beauty in action, and oh, by the way, her name is The Bloodhound:

She isn’t the only sailing Bloodhound. In 1992, Gilbert, Richardson & Swindall built a 29.87 meter sail yacht with a top speed of 10.0 kn powered by a Perkins diesel engine.With her teak deck, wood hull, and teak superstructure, this Bloodhound is a beauty that’s been spotted cruising near United States of America.

But even she isn’t the only Bloodhound yacht. The original Bloodhound was built in 1874 for the Scottish Marquess of Ailsa by Fife & Son shipbuilders. This Bloodhound was hugely successful and won the Marquess a considerable amount of money. In 1877 alone, she won around £2,000, a huge sum at the time. In fact, she won every race she entered until she burned in a fire in the 1920’s. The Bloodhound mentioned in the paragraph above was built in the 1990’s in Del Ray California, is based on drawings recovered from the family Castle in Scotland.