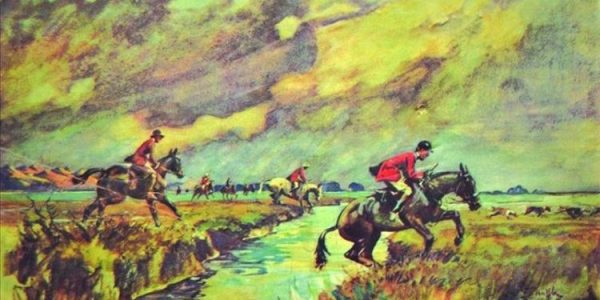 When one hears the term “fox hunt,” one generally think of Britannia, and not an Islamic republic in South Asia. Tragically, that is what the British couple caring for the Peshawar Vale Hunt (PVH) pack in Pakistan considered on the eve of Pakistan’s independence when they shot the entire pack of Foxhounds thinking that Pakistanis were incapable of looking after them. It was an unbelievable thing to do. If it really happened.

A century of British rule in Pakistan started in 1843 and didn’t end until the formation of modern day’s Islamic Republic of Pakistan in 1947. The Brits’ impact on the country and all aspects of its culture can’t be overstated, and that included sport and recreation. Cricket, for example, was introduced by the British, and it is now one of the most popular sports in Pakistan.

During the nineteenth century, British Army officers brought packs of Foxhounds with them to India to pursue the hunts they loved back home, but it was expensive for regiments to maintain their hounds, so local hunt clubs were established. In 1870, the Peshawar Vale Hunt was founded in northwest Pakistan and became the most famous hunt around. At first, hunts were mostly drag hunting in which the hounds followed a scent trail laid by a rider dragging smelly material, but as the sport grew, hunts went after jackals. The Peshawar Vale Hunts were exceptional for their pace, distance, and the countryside covered. 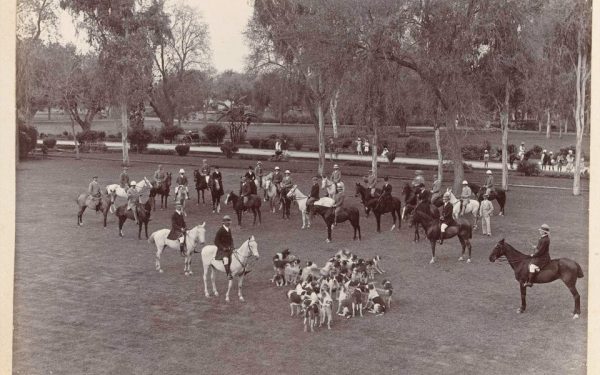 It was not, however, easy for the hounds. The climate was hard on them, and malaria and lung trouble caused by dust didn’t help. Jackals were also silent carrier of rabies, and around 1890, the pack was decimated by rabies. In 1910 again, twenty-two couples died of rabies or distemper.

Polo started to become increasingly popular among the soldiers, and after WWI, some proposed that the PVH be dismantled because officers couldn’t afford to keep horses for both polo and hunts. The commander of the Peshawar District considered it a “monstrous proposition”and stated that he “would die of shame if, after all these years, the P.V.H ceased to exist during my tenure here.” The PVH prevailed. It survived the Afghan War, the Frontier uprising of 1930-31, and other travails.

But did the hounds survive the final act of their British caretakers on the eve of Pakistan’s independence in 1947? Was the entire pack destroyed?

The story of the slaughter of the pack has endured for 75 years, though the details vary here and there. In one account, it was the departing master of fox hounds, Major Gough, who called each hound up to him and personally shot each one because he couldn’t bear to let his beloved hounds fall into the hands of the ‘locals’ who would be left behind.

Whatever the version, this narrative always niggled at Tim Willasey-Wilsey, a former senior British diplomat and professor of War Studies and in the 1990s, he sought to get to the bottom of it. He corresponded with people who had been there, including a retired Pakistani general. Furthermore, after reading Peter Malins’ memoirs, Willasey-Wilsey was persuaded that the horrible story was a myth. No one who was present at the time recalled such an incident, and indeed, Peter Malins wrote that a few months after Pakistan’s Independence and Partition in 1947, he was invited to ride out with the hunt now run by a Pakistani Lieutenant-Colonel. The hounds were only alive, but in fine form and doing well.

A million people died during Pakistan’s partition, including large numbers of Hindus and Sikhs, and yet the shooting of a pack of hounds is what endured for three-quarters of a century. As dog lovers, we get it. But sadly – and probably accurately, Willasey-Wilsey surmised that more was at play. Vilifying former colonizers might have been part of it, but Willasey-Wilsey also speculated that “such tales have an important function in creating a newly formed nation’s sense of itself….the former conquerors of South Asia…had to be evil. The truth or falsehood of the story has little importance…what matters is story feels right because it conveys the kind of actions that the colonizer could have done or should have done or must have done.”

Happily, then, the answer to the post title is that no one shot the Peshawar Vale Hunt Pack.

As for current status of the pack itself, between the pressure of land reform and the strain of the conflict with India, the hunt had faded out by the 1970s. Recently, however, Faiysal Alikhan, a Pakistani businessman and landowner who fell in love with English hunt life while studying at Oxford, is seeking to revive the Peshawar Vale Hunt. He sees it as a way to bolster Pakistan’s own old hunting traditions and promote the community spirit of hunt life.

Alikhan went around hunts in England to see if they would donate dogs, and the Duke of Beaufort’s hunt and Berkeley hunt eventually agreed on the condition an English huntsman stayed with his project in the early years to ensure the dogs were well cared for.  Seven hounds were shipped to Pakistan in January 2019, and as of 2020, a 19-year-old from Hampshire was sleeping in a kennel in rural Pakistan. We encourage you to read more about Faiysal Alikhan’s vision here.

There is a Facebook page for the PVH, and while it hasn’t been active since 2019, it’s worth a visit to see images.