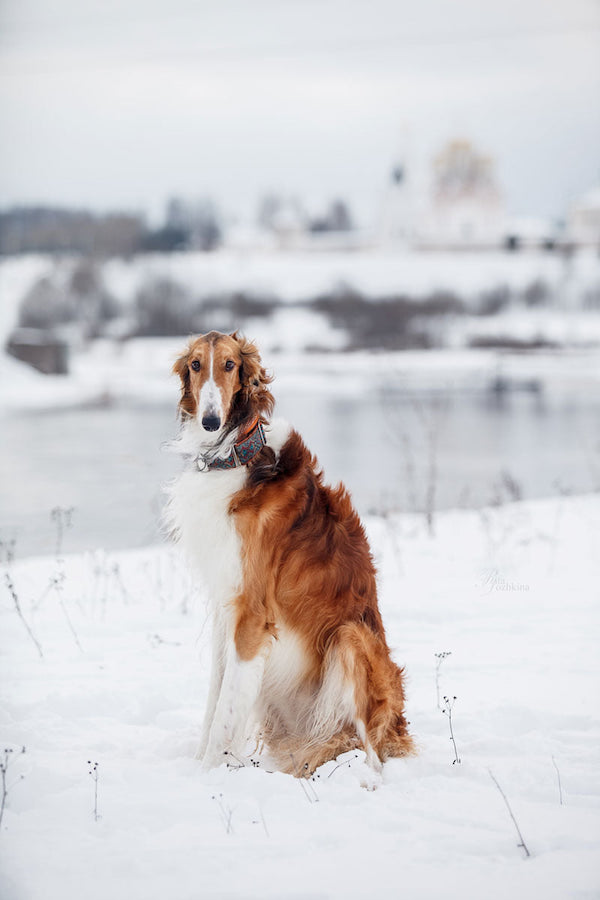 In Czarist and Soviet Russia, wolves were hunted by aristocracy, royalty and land owners, an endeavor in which dog and horse were important players. It was an entirely different time in a different world, but it is the legacy of the Borzoi which, after all, was once known as the Russian Wolfhound.

We get a sense of the incredible sight these hunts must have been from Joseph B. Thomas of Valley Farm Kennel. In 1903, Thomas visited Russia three times to import Borzoi from the Perchino & Woronzova kennels and gave an account of a hunt he attended that was hosted by His Imperial Highness the Grand Duke Nicholas. Thomas wrote:

“The hunting preserves of the Grand Duke Nicholas extended over two hundred thousand acres. The establishment of the Grand Duke was laid out in ‘the grand manner:’  the ten individual stucco kennels for the Borzoi, each with a grass court, flanked the dip of a valley aligned with the magnificent hunting lodge of Italian architecture. At the far end of the valley, the foxhound kennels designed in keeping with the lodge completed the rectangle…. On his enormous estate of Perchino, the hare, the fox, and.the wolf are preserved with the greatest care. The three hundred Borzoi and hundred couple of foxhounds are kept in the most perfect manner, trained and fitted for their work with the discipline and individual attention practiced in a racing stable…. The Grand Duke’s Borzoi are exclusively the ancient type hounds.” 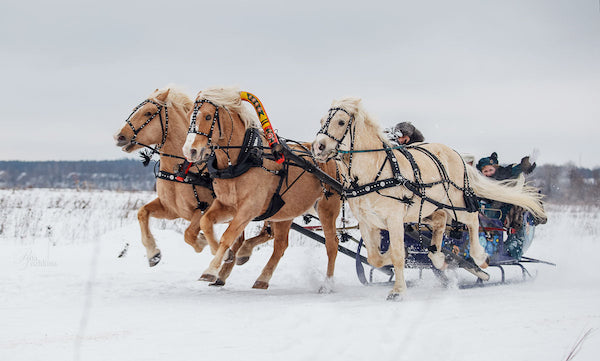 The Grand Duke’s hunting lodge, “Perchino” was located about 125 miles from Moscow.  There, he maintained eight to ten kennels based on color and pattern, from white to brindle, each kennel assigned two hunters along with a kennel boy who lived next it. An additional kennel was the Grand Duke’s svora, or pack, made up of the duke’s best – and very favorite – dogs. As Denise Flaim wrote in a piece for the AKC: “This personal pack had at least three dogs of each color, so that when hunting they could be leashed together, adding to the visual spectacle.” At its peak, Perchino housed 365 dogs that included 100 Foxhounds, 130 hunting Borzoi, 20 retired Borzoi, 15 Greyhounds, and 100 Borzoi puppies. Little wonder that he employed 78 people just to tend to them.

We are fortunate to have the kind consent of Рита Ложкина (Rita Lozhkina) of Moscow who photographed a recent reenactment of a Russian hunt held every winter in which participants are dressed in period costumes; the ladies ride side-saddle, sleighs are included, and of course there are the dogs. Her beautiful images take us back to what it must have been like: 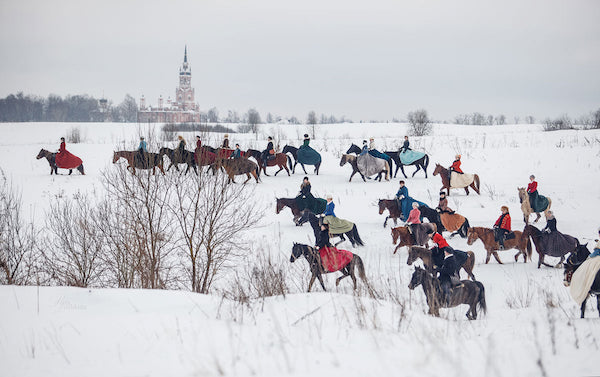 Hunting parties in those days could include over 100 Borzoi representing several kennels,  many of which bred their dogs for a specific coat color to make them easily identified from a distance.  A “beater” holding the leashes of up to six dogs would enter an area in which wolves had been spotted.  Mounted hunters wearing the Grand Duke’s signature green livery would station themselves in an open spot where the wolf or wolves might break, and once the beater spotted a wolf, he would shout “Loup! Loup! Loup!” and slip the dogs, normally a dog and two bitches. The bitches would bite the wolf’s legs to disable it, while the male would attack his neck. The first rider would then dismount and either dispatch the wolf with a knife (using firearms was considered unsporting for “small game), occasionally release it, or muzzle it, put it in a cage, and take it back to Perchino where it would help train the next generation of Borzoi. 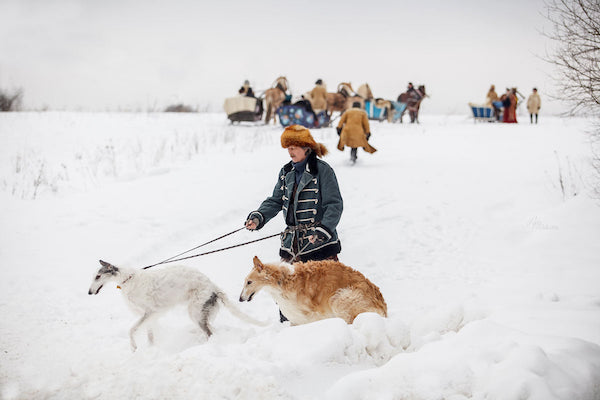 Wolf habitat covered huge territories from the western borders of Russia to the shores of the Pacific Ocean, and from the Arctic Tundra to the steppes of Kazakhstan and Mongolia. Wolf hunting was (and still is) an old Russian tradition. The Imperial Borzoi Kennels of the Czars, known as Gatchin, were started in 1613. In 1650, a book of rules for hunting with Borzoi was published and dedicated to Czar Alexis. In the seventeenth century, Russian nobility maintained huge kennels of 150 – 160 Borzoi, and by the 19th century, the hunt had become a social institution. Curiously, all usual social distinctions were dropped at that time,  and a nobleman might defer to a peasant with superior tracking skills. 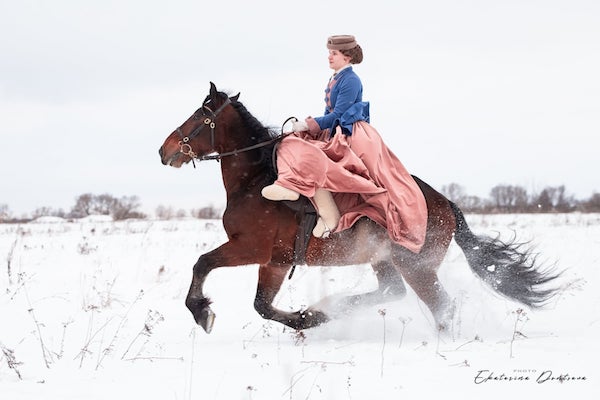 We offer our thanks to Rita Lozhkina for allowing us to share her marvelous photographs. You can see more of them under “photographs” on the Woodbrook Hunt Club’s Facebook page where we first spotted them. Woodbridge is the oldest hunt club West of the Mississippi River and continues to maintain the traditions of riding to hounds. Our appreciation, too, for Jennifer Hansen’s help in reaching Natalia Kornilova who participated in the hunt recreation, and lead us to Rita Lozhkina.