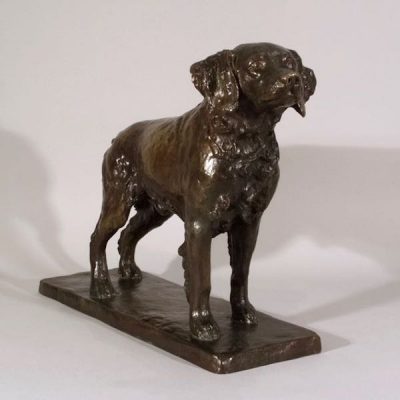 If you travel to northwestern France and visit the provincial market town of Callac, you’ll notice a rather magnificent statue of a French Cob horse. It is said that this statue represents how a Brittany should appear. 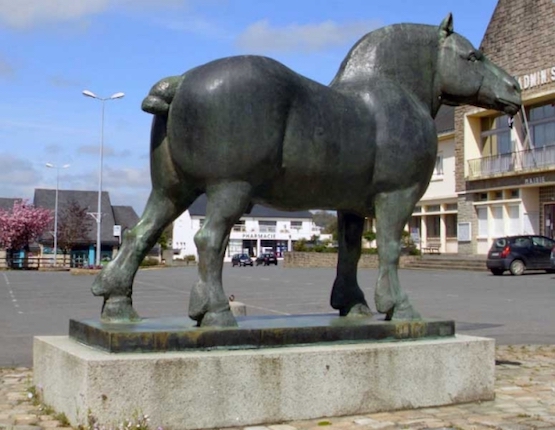 We grant you that it’s a bit of a leap to see the connection between a horse and this dog breed,  but we suspect the similarities are metaphorical. More than one source, including the Brittany Club of Great Britain, reports that it is the horse’s qualities of strength and cobbiness that are regarded as an ideal in the Brittany.

Some still regard Callac as the capital of Brittany spaniels for it was first bred in this region (note: while the AKC and the UK’s Kennel Club no longer refer to the breed as a spaniel, it is still listed as the Brittany Spaniel, or Epagneul Breton, with the FCI). There are a number of breeders in the village which has been involved with the breed for over a hundred years, and indeed,  GourmetFly.com will even arrange a visit to a breeder’s kennel for anyone visiting the town.

Callac as a destination point is not a 21st century development. During the 19th century, many of England’s landed gentry went to nearby Argoat to attend “shoots” for partridge and snipe. They typically took their best gundogs with them, mostly pointers and setters, and when it was time to go home, they often left their dogs behind so that when they returned to France for the next shoot, their dogs would already be there. Whether by design or by accident, by the mid 19th century, many of these dogs that included English Setters, Pointers, and Gordon Setters had been bred with the French’s own native breeds, one of which included a spirited spaniel known as the Fougeres. Ultimately, these breedings produced the marvelous Brittany.

We don’t know if it’s still there, but at one time, there was a museum in the area that offered a poignant tribute to the breed with an interactive, instructive set of videos, photographs, copies of paintings by Riab, and sculptures by a fan of the breed, Richard Fath. There was even a 3D simulation of the breed’s particular gait when running. We would like to hear from our readers if anyone has visited this museum!

Image: Sculpture by Richard Fath (1900-1952). The model for this bronze piece was Kaer de Cournoulaille, a dog bred by Emile Bourdon of Callac, Province of Bretane, France, which was imported to the United States in 1936 by Alan Stuyvesant the proprietor of Allamuchy Valley Kennels in Allamuchy, New Jersey.