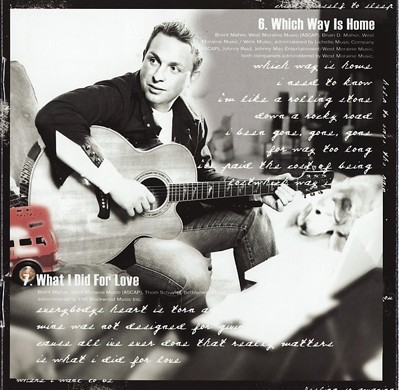 One doesn’t immediately think of “country music” as a genre to which a Scottish-Canadian music artist would gravitate, but John Reid not only kicked it around, but did so well that he was nominated for the 2008 Juno Award for Country Recording of the Year, was named Male Artist of the Year at both the 2008 and 2009 CCMA Awards, and performed at the Canada Day celebrations on Parliament Hill in 2010 which the Queen and the late Prince Philip attended.

There’s something about a country singer that calls for the companionship of a good dog, and “Wallace” a yellow Labrador Retriever, filled the bill. More than one person thought the song, Which Way Is Home had Wallace in mind because he is pictured in the liner notes.

The song that actually was about Wallace was “My Old Friend.” This is what Reid said about the song on his blog:

“This song was written the day I had to say goodbye to “My Old Friend,” Wallace. I was given 7 minutes to relive 14 years, this proved to be impossible, as I watched and felt him go to sleep for the last time, I held him in my arms. I continued to hold him and tell him how much he meant to me. I drove home alone and with a broken heart went straight to my music room and wrote this song … His love and friendship will live forever in my heart. His song is not a song of sadness but a song of celebration for the life and all the time we spent together.”

Here is the song as Reid sang it back in 2008, and if you can keep a dry eye, you’re doing better than Reid did who teared up while explaining the song to his audience:

Read more about Reid and Wallace and see more photos in this article.

2 thoughts on “A Singer’s Tribute to His Dog”