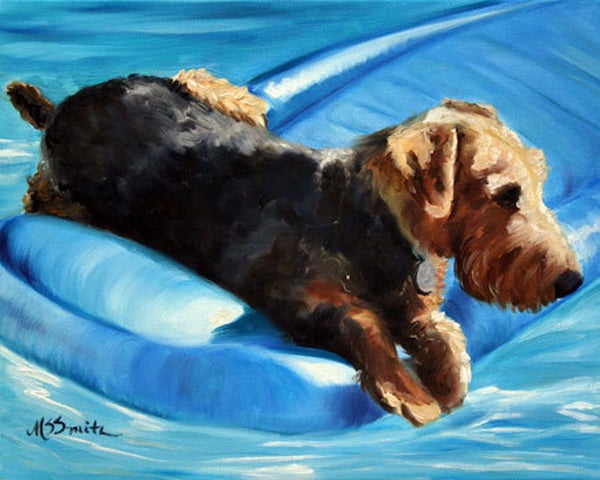 The Airedale Terrier takes its name from the valley of the River Aire that twists through the nooks and crannies of Yorkshire, England, but the breed was once known by another name, Waterside Terrier, and that may have come from competitive matches.

What we’ll describe next may offend/disturb some readers not because we’ll be splashing gore all over the place (we won’t be), but because today’s world is far removed from a time when hunting rats was an acceptable sport, if not a necessary one. We don’t hold to judging the past by using today’s lens, particularly when talking about a breed which is, at its roots, a hunting dog. These matches were part of the Airedale’s past.

Back in the day, rat hunting contests attracted lots of spectators who would line up along a three to six mile stretch of the Aire River to watch a couple of well known Airedales “do their thing.” There was quite a bit of wagering going on as to which dog would score the highest under the watchful eye of a referee. Sometimes, an entire week’s wages was at stake in one of the many side bets happening among the crowd.

The Airedales worked both sides of the waterside (hence, the breed’s early moniker) and swim from one side to the other at the behest of their respective owners. If a dog found a “live” hole, it counted as two points. A ferret was put into the hole to bolt the rat as the dogs were held back, and when the rat did bolt, it usually headed straight for the river. At this point, the dogs went after the rat with the zeal of “Dollar Day shoppers after a bargain” (as described by Gladys Brown Edwards).  The first time the rat would dive, he would swim up to forty yards underwater as the terriers doggie paddled, their necks stretched out to watch for the critter to surface. If an owner spotted the rat first, he’d call or whistle to his dog (would this be considered double handling?) but both dogs swim furiously to get to the rat first.

Rats aren’t stupid, and the rat would sensibly dive under again, this time jettisoning in the other direction. The whole thing, however, would start over again when he surfaced. Eventually, the rat’s submersions would grow shorter, and the dog nearest the rodent would usually emerge victorious when he dove underwater, grabbed the tired rat, and resurfaced with the now departed rat in his mouth. Sometimes, the dog left behind could still catch up by being the first to locate the rat, and double his score for the “mark.”

Our image of a youngster on a water float notwithstanding, today’s Airedale hasn’t lost his instincts or abilities, and the Airedale Terrier Club of America is to be commended for keeping this skill set alive through hunt tests for their breed. In 2009, Airedales became eligible to earn AKC Hunting Test titles through their upland hunt tests for Spaniels program. With this one decision, the Airedale rightfully claimed his spot as a legitimate gun dog.