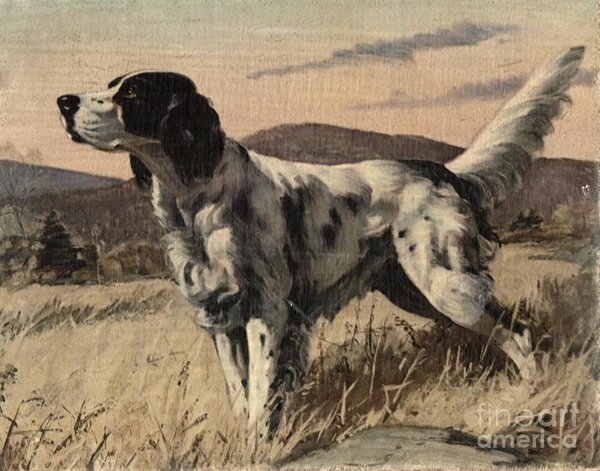 To find one of the oldest gun dogs on record, one need not look further than the English Setter which, some experts believe, predates the “English” Pointer. Its history traces back to the 14th century to a time when it was originally called a Setting Spaniel used for locating and setting birds.

Cynologists point to the writings of sportsmen of the time to support the notion that the earliest English Setter was most likely developed in France out of the Spanish Pointer, then brought to England in the 1600s where it was further modified with the addition of the Water Spaniel and the Springer Spaniel.

Early dogs worked on the moorland free ranging in front of the hunter, quartering the ground and looking for birds. When found, the dog would crouch, or “set” and remain still in the direction of the birds, often lifting a paw to indicate their position. Upon command, the dogs would rise and drive birds into nets that had been laid over them, and this method continued into the late 18th century when guns replaced nets, and the term “Setting Spaniel” morphed into the word, “Setter.”

Setters didn’t separate into the setter breeds we know today until the 19th century, and within the English Setter breed, itself, various strains emerged with two being the most prominent:  The English Setters seen in the show ring today are typically what some might refer to as Laverack style Setters named after Edward Laverack. In 1825, he began to develop his own line out of Ponto” and “Old Moll,” products of a 35-year-old English Setter line. The book he wrote, The Setter, published in 1872, was considered to be the definitive book on the breed and was the basis for the English Setter Standard.

Richard Purcell Llewellin developed his ideal by taking the best of Laverack’s dogs, and crossing them with a male named, “Duke.” Llewellin concentrated on working performance, and today’s field setter is frequently referred to as the Llewellin-type. Llewellin’s line were among the first English Setters to be imported to America.

The English Setter was first shown at a dog show held at Newcastle Upon Tyne in 1859, and it would go on to become one of the first nine breeds recognized by the AKC when it was founded in 1884. It was also among the first breeds to be registered with the United Kennel Club when that club broke off from the AKC in the early 1900’s.
Image: English Setter by Philip Burrow is available as fine art, as well as lifestyle and home decor items here.