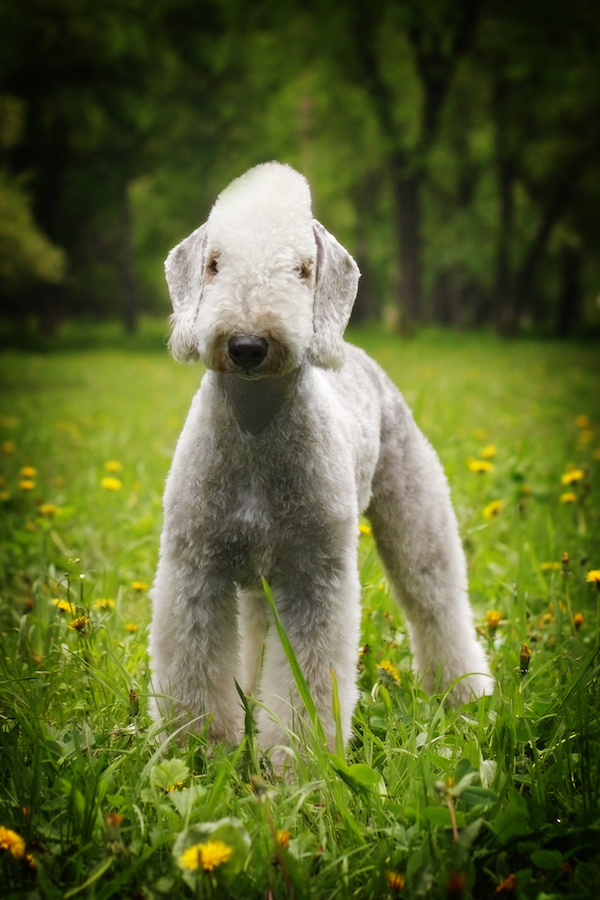 As “fronts” go, the Bedlington Terrier’s is a bit different from other breeds. Its AKC standard reads: “…the hind legs are longer than the forelegs, which are straight and wider apart at the chest than at the feet.”

Wider apart at the elbows than the feet?

While some call this aspect of the dog a “horse shoe” front, the AKC Judges Study Guide for the Bedlington Terrier refers to it as a “V Front;” by either name, this is a unique front among terriers and simply describes a dog whose legs are wider apart at the top than at the bottom. This is especially vivid when the dog is wet, or when the skin is ever so gently pulled back from the dog’s chest from behind his neck.

Why this is called for in the breed was a little difficult to tease out, but we came across the suggestion that without this shape, the chest won’t have the necessary room to accommodate the heart; the dog would also lack the breed’s characteristic “Bedlington roll,” or its unique lightness of movement and springy-in-the-step at slower paces.  A properly built Bedlington’s legs maintain a proper V-front throughout their movement as their legs move towards the center of gravity.

In Robert W. Cole’s seminal book, An Eye for a Dog, he refers to a 19th century book by Captain Haynes, Points of the Horse, in which Captain Haynes states that, “It is common for fast trotters to stand with their hooves touching.” Mr. Cole speculates that perhaps this was why this stance was promoted by early Bedlington breeders.