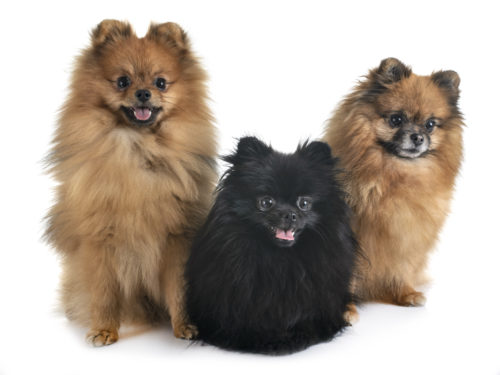 Purebred dogs are endlessly fascinating to us, from the history of their development and how they’re built, to the discoveries being made about how they tick.  How we wish, however, that their creators had thought to bestow collective nouns on a group of their breed. To our knowledge, only three breeds have such terms. One of them is the Pug. Did you know that several Pugs are called a “grumble.” True!

The Pomeranian is another breed that has a word to describe a grouping of them: A pair of Poms is called a “puff,” while a group of three or more is called a “tuft.”  And finally (and this, a late find!),  a pack of Greyhounds is referred to as a “flash” of Greyhounds.

Assorted websites have proposed their own versions of breed specific collective nouns, but they are offered in fun, and we’re more interested in learning historically accurate terms; if you know of any we’ve missed, we want to hear from you!