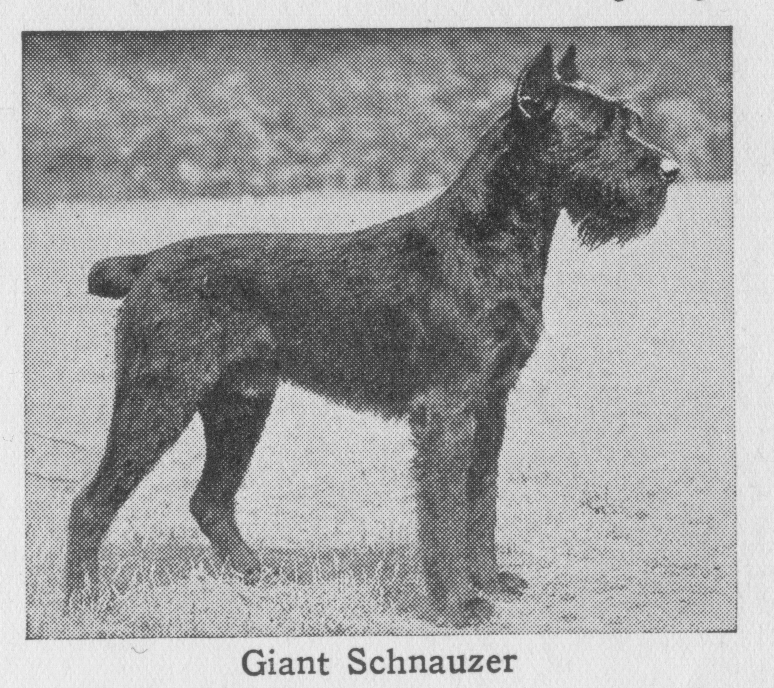 It’s now believed that the origin of all Schnauzers was in Wurttemberg, Bavaria, and the immediate surrounds. This was cattle and sheep country, and railroads weren’t yet an option at the time. This meant that livestock had to be driven to market the old fashioned way, and this meant using dogs to get the job done.
Bavarian cattlemen had probably already seen medium-sized Schnauzers on trips to Stuttgart, but these drovers needed a bigger dog to drive cattle. Enter the Giant Schnauzer, the first representatives most likely having emerged in Bavaria and Württemberg in the 17th century, though the dogs were called “Munchener” at the time. Sources we checked largely opined that the true origins of the breed remain unclear, but that some combination of a rough-coated version of the German pinscher breeds, Great Danes, Bouvier des Flandres, and Standard Schnauzer were a probable part of the GS’ ancestry. Because the dogs resembled the Standard Schnauzer, the breed’s name was changed to Giant Schnauzer (the German word “Schnauze,” meaning “muzzle”). Today, the breed is known as the Riesenschnauzer (“the giant”), but we digress.
When trains and other modern methods replaced cattle drives in Germany, the Giant found a new role as a butcher’s dog, stockyard helper and brewery guard, and later, as an excellent police dog. Still, the breed had relatively a low profile until WWI when the dogs were used for military and schutzhund work
In time, fancier discovered the breed. The first Giant was exhibited in Munich in 1909 when it was called the “Russian Bear Schnauzer.” During the 1930s some of the best Giants in Germany were imported as foundation stock by American breeders, but until the 1960s in the United States, Giants were still little known and rare, registering fewer than 50 pups a year. The breed has made great strides since those days. A Giant Schnauzer earned a Best in Show at Crufts 2008, and if we’re not mistaken, a Giant was the winningest dog (all breeds) in the US the same year having won over 35,000 all-breed points by beating more than 35,000 dogs (CH Galilees Pure of Spirit), and also won the Working Group at Westminster.
Image: A Giant Schnauzer in 1934 from ‘The Book of Dogs’ by James Gilchrist Lawson