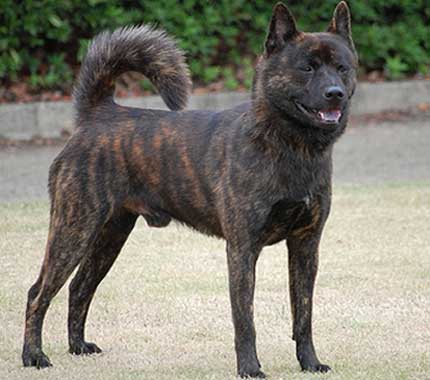 The Kai Ken (also known as the Tora, or Tiger Dog), is a native of Japan, and a pretty interesting breed; the dogs were wild and living in the mountains in the province of Kai on an island now known as the Prefecture of Yaminashi, and because they were geographically isolated by mountains, they are thought to be the purest of all the Japanese dog breeds breeds.

They are natural hunters, and will swim and climb trees to get at their game. They were first used by hunters to track deer and wild boars.

Not surprisingly, they are clever, intelligent, and independent dogs who are said to be one of the best dogs an outdoorsy person can have. They tend to be more vocal than the other Japanese breeds, and are also said to be the only native Japanese dog breed not predisposed to dog aggression (we imagine owners of other Japanese breeds may have something to say about that).

Kai puppies are born fuzzy and black and develop brindle markings as they mature, and continue to “brindle up” as late as five years of age.

The Kai Ken wasn’t recognized by the Japanese Kennel Club until 1934, the same year it was designated a “Natural Treasure” by the country of Japan. Kais were first imported into the US in the 1990s, and currently, the breed is an ‪#‎AKC‬ FSS breed which, when fully recognized, will take its place in the Working Group.