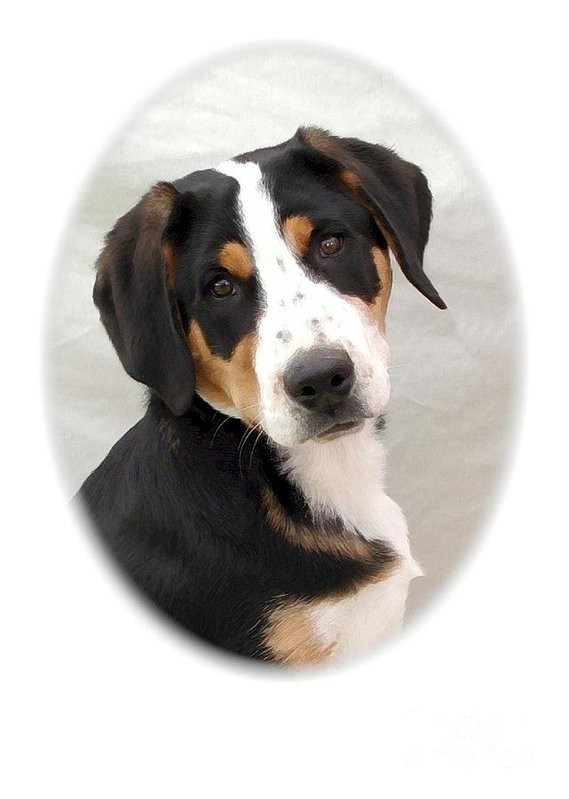 The oldest of the Swiss breeds is the Greater Swiss Mountain Dog, but its earliest origins is still the subject of discussion. Most sites share the popular theory that Swissys descended from mastiffs that accompanied Roman Legions that invaded Switzerland around the 1st century B.C.

The Greater Swiss Mountain Dog Club of America shares a second theory that a large breed of dog was brought by Phoenicians to settlements in Spain, and from there, migrated eastward to influence the development of the Spanish Mastiff, Great Pyrenees, Dogue de Bordeaux, and eventually the large Swiss breeds (some say the breed was also instrumental in the early development of the St. Bernard and Rottweiler). A third theory suggests that the breed is a Lupomollossoid, and there is yet a fourth theory put forth by a small, but growing number of experts who believe that the breed is most closely related to the Pinscher/Schnauzer family. Since it’s certain that German settlers in the Alps brought their dogs with them, some cynologists have theorized that ancestors of the Greater Swiss Mountain dog were crosses between Lupomollossoids, Mastiffs/Mollossers, and Pinschers, and this could explain any classification confusion.  We will likely never know with certainty since the breed long predates a time when records were kept about breedings.

Image from public domain: This historical photograph shows a double team of Greater Swiss Mountain Dogs pulling a wagon. They have collar harnesses, with the shaft between thier legs and are guided by the driver, who is in the wagon.

Whatever its ancient origins, by the mid 19th century, the Swiss Mountain Dog was ubiquitous in Switzerland and widely used to guard, drove, and pull carts for farmers, merchants and tradesmen; for that reason, the dogs were often called Metzgerhunde, or “Butcher’s Dogs.”  A few varieties of the breed sprang up in isolated areas of Switzerland, and while they were all similar, there were differences. Collectively, these dogs became known as Sennenhunds, roughly translated as “Swiss mountain dogs,” Swiss cattle dogs,” or as one source suggested, “Dairy Farmers’ Dogs.”

Swissys  became renowned across Switzerland and neighboring countries not only for their size and strength, but for their work ethic and marvelous temperament. This indispensable working breed was considered by most experts to be the most common dog in Switzerland until around 1870, but as mechanized transport and farming machines were invented, they soon replaced the dogs and the Greater Swiss Mountain Dog’s numbers began to decrease. By 1900, the breed had all but disappeared.

At the 25th anniversary of the Swiss Kennel Club in 1908, famed Swiss geologist and Swiss breed dog expert, Dr. Albert Heim, began efforts to save all the Sennenhunds from extinction.  Along with his close friend, Franz Shertenlieb (himself a Sennenhund fancier),  the pair successfully pressed for the breed’s recognition as a separate breed, and the next year, the Greater Swiss Mountain Dog was listed in the Swiss Stud Book.

Breed numbers grew slowly throughout Europe, and in 1945, some sources say there there were only about 350-400 dogs in existence. The breed was spared the devastation that befell so many other breeds in Europe during the world wars,  largely because Switzerland didn’t enter into either World War I or World War II. Still, the Swiss Army wanted to be prepared and trained Greater Swiss Mountain Dogs as military draft animals, and this lead to increased exposure of the breed. Interest grew, and by 1945,  it’s believed there were around 350-400 Swissys in existence.

The first Greater Swiss Mountain Dogs were imported into the United States in 1968, and a breed club was formed shortly after.  In 1983, the GSMDCA held its first breed specialty, and the American Kennel Club recognized the breed in 1995.