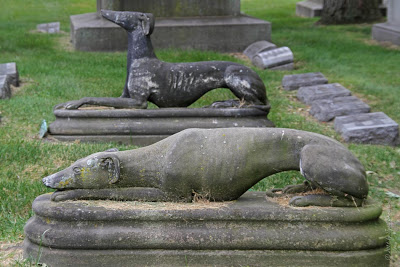 We don’t think we’re taphophiles – people who are “into” cemeteries (folks also known as tombstone tourists), but we admit to finding poignant beauty in dog-centric gravestones found there. 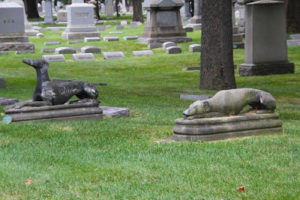 The final resting place for many of Chicago’s native sons and daughters is Rosehill Cemetery, Chicago’s largest cemetery. It includes the remains of many Civil War soldiers, a former vice president, several mayors and governors, the founder of Sears, and the founder of Montgomery Ward.  We don’t know who the Stein family was, but around 1920, two stone Greyhounds began their vigil guarding the graves. A marker reads, “Perpetual Care.” Indeed.