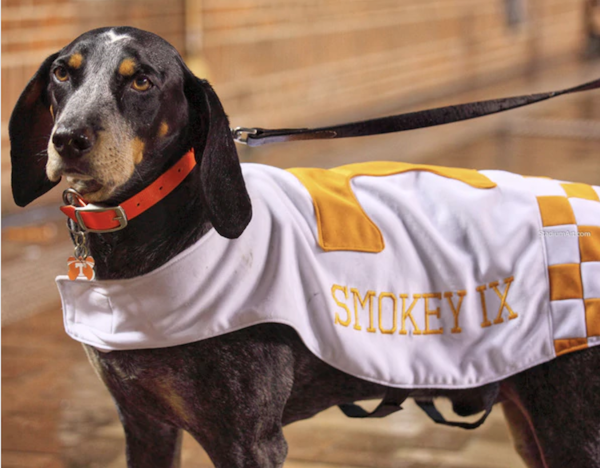 Don’t tell a Tennessee Vol that their mascot isn’t fashionable:

And never tell a Tennessee Vol that their mascot doesn’t take the game seriously (check the :38 mark):

Above all, never tell a Tennessee Vol (or Smokey, for that matter) that their football mascot is “just” a mascot.

We shouldn’t have to do this before you watch the following video, but before anyone opines that because a prong/pinch collar must be a barbaric device because it looks like one, know that a prong collar can be pulled only so tight unlike a choke chain or slip collar that has unlimited closing capacity and truly can cut off air. Some dogs should not wear a prong collar, and some people should never own one. “Smokey,” however, is a “known runner,” and the collar is for his own safety. For more on prong collars, read this.

Moving on, watch this 12 minute video about Smokey who is the real point of this post:

Still can’t get enough Smokey? Check out the article about the ten statues that were erected on the University campus over the summer of 2019 honoring the different Smokeys.

Smokey I was selected in 1953 during a contest to select a live mascot for the school. Announcements for the contest read, “This can’t be an ordinary hound. He must be a ‘Houn’ Dog’ in the best sense of the word.” At halftime of the Mississippi State game, the contenders were brought onto the field. The last dog announced was Brooks’ Blue Smokey, who barked when his name was called. The students burst into applause, which only made Smokey howl louder. Tennessee had its mascot.

One thought on “The “Smokn'” Mascot”