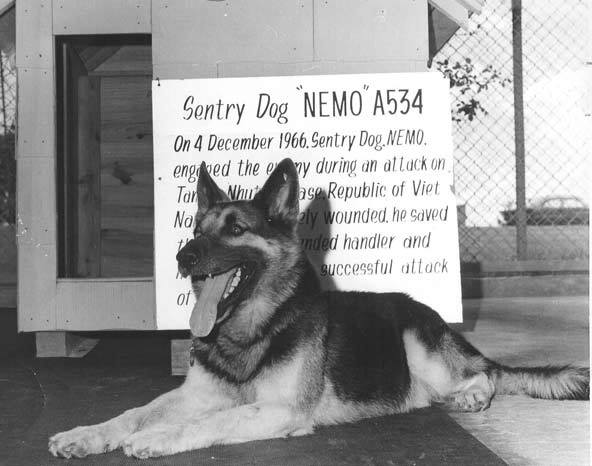 Of the many dogs that served the United States in Vietnam, “Nemo” is probably the most famous. On December 4, 1966, four year old German Shepherd Dog, Nemo, and his handler, Robert Thorneburg, had pulled night sentry duty. They were patrolling adjacent to an old Vietnamese cemetery that security police and other patrols had thought was safe when Nemo froze and stared in the direction of the graves.  He sensed what the others would soon learn: Several clusters of Viet Cong had hidden in the jungle and began to ambush.

Upon hearing the first gunshot, Nemo was released and charged toward the graveyard and into a barrage of bullets. Both Nemo’s handler and he dogged most of them, but one hit Nemo beneath his right eye and continued to travel through his mouth, while his handler was hit in the shoulder. Despite his injury, Thorneburg continued to fire on the enemy while Nemo charged at the Viet Cong causing them to scatter and giving Thorneburg enough time to call for reinforcements. Nemo dragged himself over to Thorneburg and draped his body across his handler to protect him from further injury.

Medics arrived and worked on Thorneburg while Nemo was rushed back to base and the vet clinic. It was touch and go. His right eye was damaged behind repair and he needed skin grafts and a tracheotomy so he could breath, but both Thorneburg and Nemo made a full recovery. Nemo was taken back to the United States to live out his retirement years at Lackland AFB. His heroic story was used for recruitment, and he appeared in TV, in magazines and newspapers around the country.

Nemo died December 1972 at Lackland AFB, shortly before the Christmas holiday; The Vietnam War hero was lain to rest at the DoD Dog Center, at the age of 11. Until then, his presence at Lackland reminded students just how important a dog is to his handler,  and to an entire unit. RIP, Nemo.