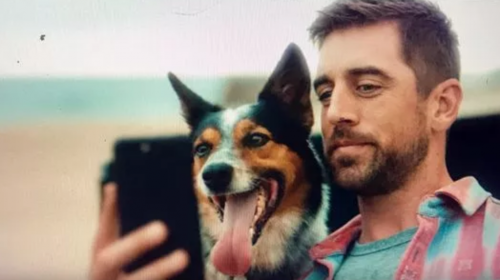 Green Bay Packer fans may be “bummed” that their team isn’t in the Super Bowl today, but that doesn’t mean they can’t still enjoy watching their quarterback, Aaron Rodgers, in action.  Of late, the California native has been appearing in some fun State Farm commercial with linebacker, Clay Matthews, but the real scene stealer is what many have believed to be an Australian Cattle Dog acting as Rodgers’ dog:

“Rigsbee” doesn’t actually belong to Aaron Rodgers, nor is he a full blooded ACD, but the athlete does have two dogs of his own: “Chance,” a Cavalier King Charles Spaniel, and “Frankie,” a Jack Russell Terrier mix.  Both dogs were adopted by Rodgers and his girlfriend at the time, actress Olivia Munn. Munn said to be a strong proponent of  “adopt, don’t shop” (NPDD prefers that people have the right to make their own educated choices about where they get their dog), is no longer with Rodgers. These days, he’s dating professional racing driver, Danica Patrick, herself the owner of a Belgian Malinois, “Ella,” and Siberian Husky, “Dallas.”

2 thoughts on “Aaron Rodgers and that Australian Cattle Dog”